Police searched on Tuesday the home of Brazil’s top Olympics official and called him for questioning about his possible role in buying votes to secure the 2016 Games for Rio de Janeiro, the New York Times reported. 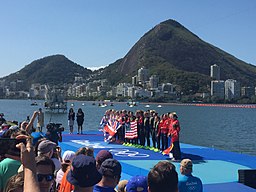 Rio 2016 Summer Olympics (Photo: Sander van Ginkel, CC BY-SA 2.0)Carlos Nuzman, credited for bringing the first Olympics to South America, was accused of paying a US$ 2 million bribe to win the vote of Lamine Diack, then president of the International Association of Athletics Federation and a member of the International Olympics Committee, UK’s daily newspaper, The Times reported.

Authorities emerged out of Nuzman’s house with suitcases, documents and a computer. Detention warrants were also issued to businessman Arthur Soares and an associate Eliane Pereira Cavalcante.

The federal prosecutor’s office demanded that one billion reais (US$ 320 million) be seized from Nuzman, Soares and Cavalcante.

A total of 11 detention warrants were issued in Brazil and France in what has been dubbed “Operation Unfair Play.”

Prosecutors said that the former governor of Rio De Janeiro State, Sergio Cabral, ordered that Soares deposit the US$ 2 million into the bank account of Diack’s son three days before the vote to decide which city would host the 2016 Games.

A company set up in Senegal by Diack’s son allegedly received US$ 1.5 million from a British Virgin Islands entity linked to Soares three days before the vote. The firm transferred US$ 500,000 to an account linked to Diack’s son in Moscow, investigators claim.

Diack’s son’s company, Pamodzi Sports Company, then transferred US$ 299,300 to a Seychelles firm owned by the former Olympic sprinter Frankie Fredericks on the day of the Rio vote, according to the New York Times.

Cabral was convicted on bribery and money laundering charges in June and sentenced to 14 years in prison. Diack was arrested in 2015 in France on accusations that he received bribes for covering up failed doping tests by Russian athletes which has since triggered a broader investigation.

Since the Games ended a year ago, a number of high ranking officials have been implicated in a widespread corruption inquiry involving construction giant Odebrecht including Rio’s former mayor Eduardo Paes.

Nuzman’s lawyer, Sergio Mazzillo, said Tuesday that his client would cooperate but “did not commit any irregularity.”

“Unfortunately, this has created a media spectacle," he said.