A Cambodian woman was arrested for allegedly trafficking more than 20 victims to work illegally as domestic servants in Malaysia, the Phnom Penh Post reported Monday. 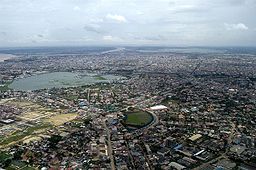 Phnom Penh, Cambodia (Photo: KY Geologist, CC BY 2.0)Oum Radin, 26, is accused of luring Cambodian women into traveling to Malaysia to work for a monthly salary between US$ 300 and US$ 400.

“All the victims agreed to go and the offender prepared documents and passports, taking them to Malaysia since 2014,” the Cambodia Daily reported citing a statement on the National Police’s Facebook page.

However, when the victims reached Malaysia, they were forced to work 18-hour days, seven days per week without rest. Radin reportedly made about US$ 1,500 for each person. She worked alone according to the Anti-Human Trafficking Department.

If convicted, she faces seven to 15 years in prison. The term could extend to 15 to 20 years if any of the victims are found to be minors.

In 2011, the Cambodian government banned maids from traveling to Malaysia amid abuse and exploitation concerns. But the ban was lifted in January after a directive was signed by Prime Minister Hun Sen late last year.