Russian Oligarch to be Charged with Organizing Crime Group 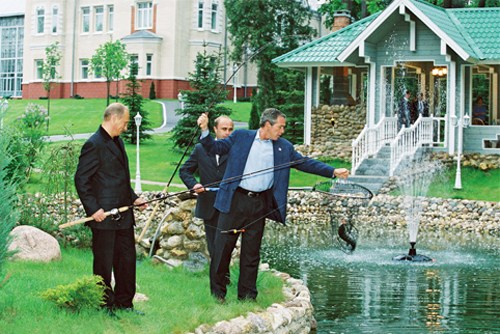 President Vladimir Putin fishes with US President George W. Bush on his Novo-Ogaryevo estate (Photo: Presidential Press and Information Office CC BY 3.0)Dmitry Mikhalchenko, the owner of the holding company "Forum", was originally arrested last year for attempting to smuggle 68 million rubles (US$ 1.1 million) worth of collectible wine and cognac through a Baltic sea port, according to Crime Russia.

While authorities investigated the smuggling case, however, they uncovered the theft of 225 million rubles (US$ 3.7 million) from the state budget intended for construction work on President Vladimir Putin’s Novo-Ogaryovo residence, Kommersant reported.

According to Rosbalt, an unnamed source close to the investigation told the news agency that Mikhalchenko’s name appears on almost every page of the case.

"The investigation believes that the offense was committed by an organized crime group. However, the entire accusatory theory is built on Dmitry Mikhalchenko as its mastermind," the source told Rosbalt.

Since Mikhalchenko’s arrest, a string of businessmen and law enforcement officers have been placed under investigation. Many of the defendants have testified against the oligarch, claiming that he is the mastermind behind the smuggling operation.

Among those arrested are Grigory Pirumov, Russia’s Deputy Minister of Culture. He and two others were charged for the embezzlement of 186 million rubles (US$ 3.1 million) from the state budget, this time intended for the restoration of the Izborskaya Fortress near the city of Pskov, according to Crime Russia.

The construction company in charge of restoring historical monuments on the Ministry of Culture’s orders was called BaltStroy, which is reportedly owned by Forum and Mikhalchenko.

The oligarch was originally linked to the smuggling of alcohol after authorities at the Baltic sea port of Ust-Luga found 134 containers of gourmet meat declared as potato chips and multiple containers of premium wine and cognac, according to Crime Russia.

Authorities had to open all 5,000 bottles to verify their authenticity, including four bottles of 1982 Chateau Lafleur wines – worth approximately 3.8 million rubles (US$ 65,000) each.

After seizing and verifying the alcohol, authorities then by law had to dispense of the entire collection, which they did by pouring it into the sewer.

All of the seized items were intended for restaurants and bars across St. Petersburg owned by Mikhalchenko’s company Forum.