Peruvian prosecutors are waiting for a local judge to sign off on a second arrest warrant for ex-President Alejandro Toledo after the U.S. declined to detain him, media reported Tuesday. 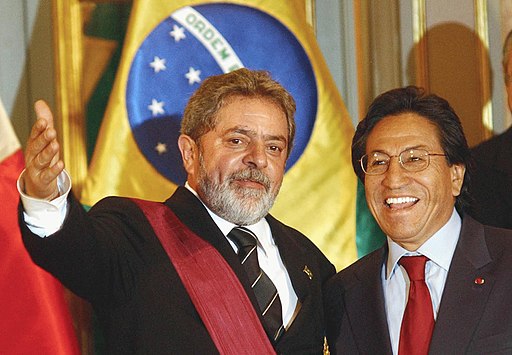 Alejandro Toledo (right) with former Brazilian President Lula de Silva, also implicated in the Odebrecht scandal (Photo: Marcello Casal Jr./ABr CC BY 3.0 BR)Toledo is currently a fugitive and is believed to have accepted US$ 20 million in bribes from the Brazilian construction company Odebrecht in return for a highway-building contract.

In February, authorities in Lima raided the former president’s home after discovering that an alleged US$ 11 million had been transferred to him through his friend Josef Maiman, a Peruvian-Israeli businessman.

The money was then "washed" through an offshore named Ecoteva, founded by Toledos’ mother-in-law, and used to buy a series of properties including his home in Lima, according to Andina.

Although the alleged money laundering is a part of a separate criminal investigation, prosecutors believe the funds were part of Odebrecht’s US$ 20 million bribe.

Six days after the raid on his home, a judge issued the first arrest warrant for Toledo, while prosecutors prepared corruption charges against him for his role in the Odebrecht scandal.

Peru then offered a US$ 300,000 reward for his capture. It informed Interpol that he may either be in Israel or in San Francisco, where he is a visiting scholar at Stanford University, Associated Press reported.

But while Israel’s foreign ministry confirmed that Toledo would not be allowed entry, the US declined to detain him – prompting Peru to file the request for a second arrest warrant.

This time the warrant is related to the Ecoteva case, which prosecutors hope to bolster their case for his extradition.

Yet according to prosecutor Rafael Vela, the local Peruvian Judge Abel Concha has not yet signed off on the new warrant.

"We don’t know what the legal justification is for not doing so. I’m making this public because it’s something that has really surprised us," said Vela, according to Reuters.

However, Kuczynski was Toledo’s finance minister and prime minister and is currently under preliminary investigation over a law he signed in 2006 that removed legal obstacles to highway contracts won by Odebrecht, according to Reuters.

Odebrecht is at the centre of an enormous bribes-for-contracts corruption scandal that has engulfed Latin America.

Although Toledo denies the charges, its jailed CEO Marcelo Odebrecht told US federal judges that between 2005 and 2014, the company paid US$ 29 million in bribes to Peruvian officials.

Toledo, who served between 2001 and 2006, is one of three consecutive Peruvian presidents named in the corruption scandal by Odebrecht himself.