An Argentine prosecutor, in charge of an investigation into police corruption, was found bound and gagged in his office next to a death threat written in sugar, media reported Wednesday. 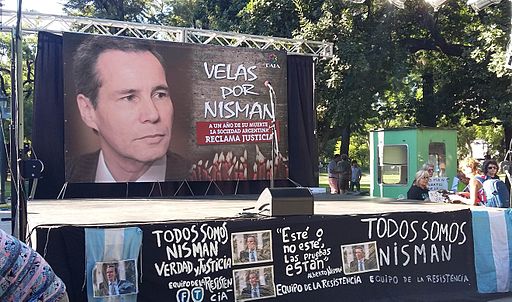 Protest march for Alberto Nisman (according)In the third attack on him in four days, Fernando Cartasegna was gagged and tied with his arms and legs bound to his back in his office in La Plata, according to La Nacion.

He was rushed to hospital but did not sustain any serious injuries and was discharged Thursday.

Cartasegna never saw the attacker who approached him from the back and tried to strangle him, according to the marks found on the prosecutor’s neck.

The word ‘Nisman’ was spelled out in sugar on his office floor.

Alberto Nisman was a federal prosecutor shot dead in his Buenos Aires apartment in 2015, hours before he was to appear in Congress to outline an accusation against then-President Cristina Fernandez, according to Reuters.

Nisman’s death was initially dubbed a suicide, but many Argentinians believe it was a murder, according to VICE news.

Cartasegna is said to be investigating allegations that police officers had been taking bribes from lawyers representing defendants in traffic crimes, according to Euronews.

On Saturday, Cartasegna was attacked on his way to work by three people dressed in police uniforms.

"They were two men and one woman. First they called me by name and then started to beat me, insulted me and told me ‘you’re going to get the same thing as Nisman’," he said, La Nacion reported.

On Sunday, he said someone entered his home and tormented his pets. They left pamphlets on his patio that read 'Meet the New Nisman.'

La Plata mayor Julio Garro called the attack "outrageous" and said it was linked "to the fight against the mafias," according to Telam.