Two drug cartel leaders were killed Saturday in separate clashes with Mexican authorities in the northern state of Tamaulipas, the Associated Press reported. 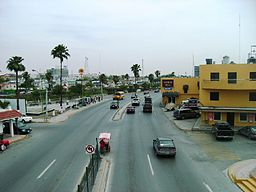 Reynosa, Tamaulipas (Photo: Jbagui2000, CC BY-SA 3.0)Julian Loisa Salinas, dubbed "Comandante Toro" was gunned down by Mexican marines in Reynosa, a city across from McAllen, Texas where he was reportedly the Gulf cartel’s local leader.

His rival, Francisco “Pancho” Carreon of the Zetas cartel was shot further south in the Tamaulipas state capital of Ciudad Victoria, according to authorities.

“The government of Tamaulipas and federal forces will not relent against crime," the local government said in a tweet following the separate incidences that left vehicles aflame on highways.

Earlier this month, Alfredo Beltran Leyva, another former Mexican drug cartel leader and once an ally of Joaquin "El Chapo" Guzman, was sentenced to life in a U.S. prison.

Mexico’s over decade-long drug war is estimated to have claimed approximately 120,000 lives from 2006-2012, not including disappearances.

A report by the Council on Foreign Relations blames the country’s weak judicial and police institutions, as well as its proximity to the world’s largest consumer economy for harboring sophisticated drug networks.

Despite diplomatic tensions, U.S. President Donald Trump has vowed to join forces with Mexican President Enrique Pena Nieto to battle drug cartels and the flow of narcotics into the U.S