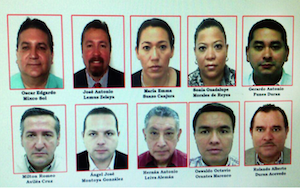 Mugshots of the 10 suspects arrested Thursday (Photo: General Prosecutor's Office of El Salvador) According to the chief prosecutor, the suspects were part of an organized network that helped the former leader redirect millions through radio stations owned by the Samix Group—a media company founded by the President and his wife.

Saca’s brother in law and a prominent publicist were among those arrested. Four suspects remain at large.

The former president was arrested in November 2016 along with several other former officials for illegally diverting approximately US$ 246 million from the National Treasury.