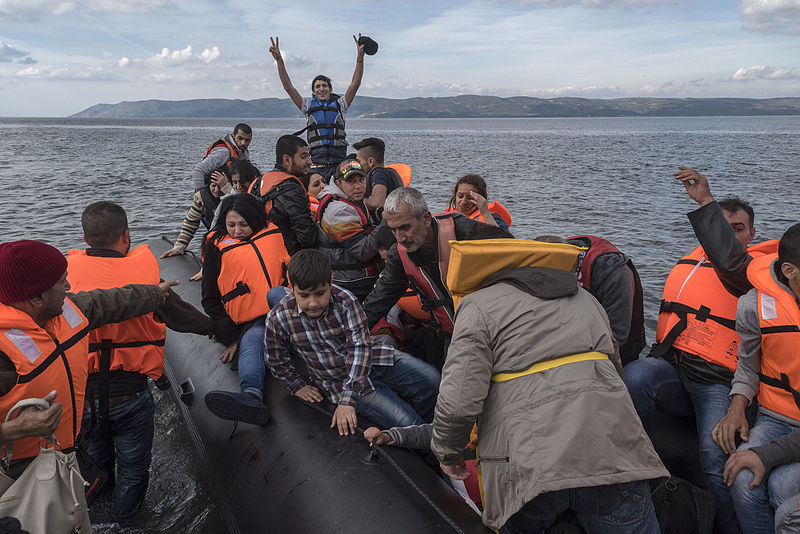 Refugees arriving at Lesbos, Greece, aboard on an inflatable boat (Photo: Ggia, CC BY-SA 4.0)Police in Izmir were reportedly tracking the suspects since October and caught them as they were planning to smuggle more migrants to Italy.

Police estimated the group made a profit of about 4 million Turkish Lira (US$ 1 million) smuggling migrants along the dangerous sea route from Turkey’s coast to Europe.

According to the United Nations refugee agency UNHCR, out of the nearly 1.4 million migrants and refugees that crossed the Mediterranean in the past two years, some 7,500 drowned because smugglers were using flimsy inflatable rafts that often do not last the journey.

The arrested suspects charged between US$ 500 and US$ 1,000 per person to take migrants to the Greek islands and US$ 4,000 to take them to Italy, the Daily Sabah reported.

The group admitted to contacting Syrians living in provinces along the border, transferring them to Istanbul and Izmir, and finally taking them to the coastal cities where they would begin their boat journey.

In an attempt to crack down on the massive human trafficking network in western Turkey the Anti-Smuggling and Organized Crime Unit has carried out so far 14 operations, intercepting some 491 migrants from all over the world including Syria, Yemen, Ghana, Bangladesh and Myanmar.

A total of 37 suspects have been detained, three of them Syrian and the rest Turkish citizens. Seven suspects were released, and the rest, including the Syrian nationals, remained in custody.