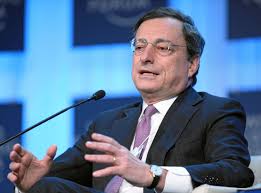 President of the European Central Bank Mario Draghi (Photo: World Economic Forum CC BY-SA 2.0)The police report said the suspects, a nuclear engineer and his sister, were both arrested in Rome and were well known in the city’s financial community.

Police did not name the suspects, but local media, identified them as Giulio Occhionero and Francesca Maria Occhionero.

The siblings are suspected of accessing information concerning national security, illicit access to a computer system and illegal interception of computer communication and storing them on US servers, police said.

The FBI Cyber Division has since seized the servers.

The alleged hackers acted "with the aim of making a profit for themselves or for others," according to court documents quoted by Bloomberg.

Roberto Di Legami, the head of the specialized police cyber unit that conducted the investigation, told Reuters that Giulio Occhionero used malware to infect thousands of email accounts belonging to bankers, businessmen and several Vatican cardinals so he could make "investments based on reserved information."

Politico cited Italian law enforcement officials familiar with the investigation, saying Occhionero was a high ranking member of a masonic lodge and had been shortlisted for the position of Master Mason. The officials said they believed he planned to sell data on leading figures in the Italian establishment.

The hacking operation came to the attention of investigators when an infected email was sent to an administrator at ENAV, the Italian company in charge of air traffic control, Politico said.

The company’s report to Italy’s National Center for Cyber Crime led to the arrest of the siblings.