A justice on Nigeria’s Supreme Court has been charged with 16 counts of corruption and laundering 505 million naira (US$ 1.6 million) via a local company, media in the West African country reported. 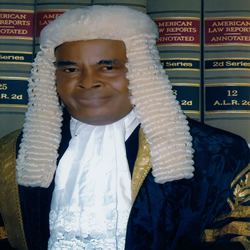 Nigerian Supreme Court Justice Sylvester Ngwuta (supremecourt.gov.ng)A raid by Nigeria’s Department of State Services (DSS) on the home of Sylvester Ngwuta on Oct. 8 uncovered a bag containing 27 million naira in cash and four passports, which he is accused of using interchangeably.  Ngwuta was released on a bail of 100 million naira on Monday.

The Nigerian Bar Association has denounced the raids and accused the DSS of running a “Gestapo-style” operation, the BBC reported.

Prosecutors cautioned against bail for Ngwuta, saying he could use his influence as a senior judge to hobble the case against him.

Ngwuta has pleaded not guilty to all charges.