Investigative journalists at Organized Crime and Corruption Reporting Project partner RISE Moldova, launched on Wednesday Prezidentiale 2016, an online source for voters who want to know who the candidates are, what businesses they are involved in, and where their money is coming from. 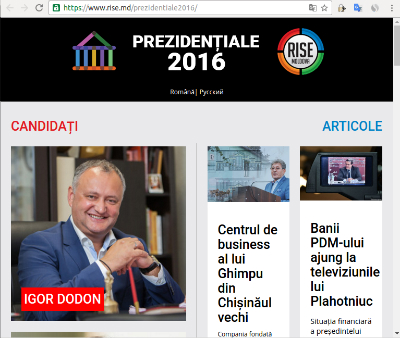 Initial stories trace connections between the leading candidate and a mysterious Russian-linked offshore that has funneled money to the Socialist Party; the ties between a reform candidate and two wealthy businessmen who fled convictions in Moldova; and how a historic building another candidate wants to demolish vanished from a list of protected properties.

Reporters have worked for months to identify the assets, connections, and business and criminal histories of all candidates running in Moldova’s presidential election Oct. 30. The election marks the first time in 20 years that Moldovan voters can directly elect a leader.

The journalists also prepared a short video explaining the project.

Several dozen candidates announced their intention to run, but so far only eight have collected sufficient verified signatures to be on the ballot, although others may still be approved by elections officials. Stories on the first eight, including listings of their assets, businesses, and those belonging to family members, are posted today.