The US Treasury on Thursday sanctioned 37 people and entities linked to Russia and Ukraine – including companies connected to a bridge championed by President Vladimir Putin – in an effort to beat the busting of sanctions imposed on Russia after it annexed Crimea in 2014. 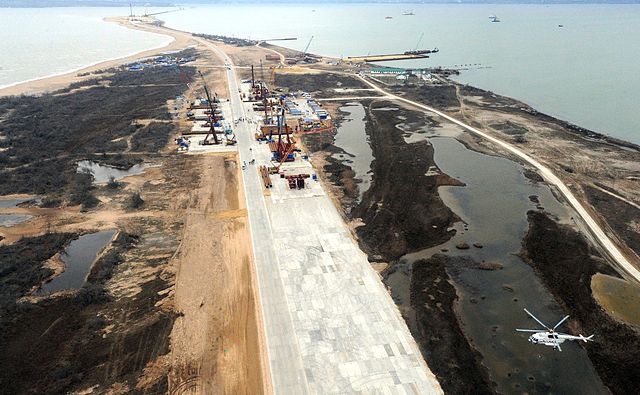 The Kerch Strait Bridge, set to be completed in 2018, has been made a priority by Putin but has recently drawn controversy over allegations of worker abuse and unpaid wages.

The bridge’s builders argue the sanctions will not impede construction. In a statement quoted by Russian broadcaster RT, the official information center for the bridge said that contractors have "all necessary resources for the timely implementation of the project."

Newly sanctioned companies include Russian firm CJSC ABR Management, which the Treasury Department says has acted on behalf of the previously sanctioned Bank Rossiya. Also identified were a number of subsidiaries of the Bank of Moscow and Gazprombank, both of which were sanctioned in July 2014.

A spokesman for Russian President Vladimir Putin, Dmitry Peskov, raised the possibility of Russia imposing its own countermeasures in response to the US move, RT reported.

"We have to analyze (which sanctions were) expanded, but usually, in such cases, a principle of reciprocity is used," Peskov was quoted as saying.

"We do not think such a rhetoric is constructive, promising and conducive to the solution of any problems," he said.

OCCRP reported in August that many western and Middle Eastern businessmen are still covertly doing business with Crimea in violation of Western sanctions.