A senior prosecutor in Kyrgyzstan survived an explosion on Friday in what media reported as an attempted bomb assassination. 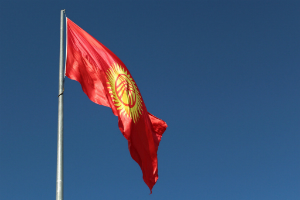 Kyrgyzstan's flag (Photo: Naika Lieva, CC BY-SA 2.0)Erkin Kurmanaliev, a senior member of the prosecutor general’s internal investigations division, lost a hand and suffered an injury to one eye after picking up a box lying on top of his car in a residential district near the capital Bishkek, local news website Kloop.kg reported.

Images posted in local media showed the roof of the car curled inward and blood pooled on a gravel road.

When contacted by the OCCRP, the prosecutor general’s office confirmed that Kurmanaliev was the victim of the explosion.

Kurmanaliev is hospital in a serious condition, according to Radio Free Europe.