A court in the Netherlands on Wednesday ordered the seizure of a reported € 123 million (US$ 135 million) in assets from a company linked to the eldest daughter of Uzbekistan’s president, in a case involving bribery by European telecommunications companies in the impoverished Central Asian country. 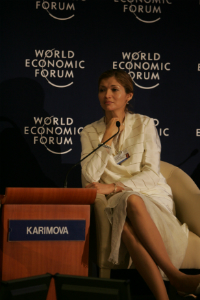 Gulnara Karimova (Photo: Nader Daoud, CC-BY 2.0) The Amsterdam court found that VimpelCom and Telia AB had paid bribes to Talikant, the company linked to Gulnara Karimova, in exchange for 3G licenses, telecommunications frequencies and number blocks for their Uzbek subsidiaries.

The court ordered Talikant to pay a fine of € 1.58 million and forfeit shares in Telia AB’s Uzbek subsidiary, Ucell. Media reports put the value of seized assets at € 123 million.

The verdict is part of an investigation by Dutch, US, Swiss and Swedish authorities into alleged bribery of Karimova, the daughter of President Islam Karimov, by VimpelCom, Telia AB and TeleSystems PJSC.

VimpelCom, owned by Russian businessman Mikhail Fridman, agreed in February to pay US$ 795 million in fines to US and Dutch authorities after admitting to bribing Karimova.

The OCCRP has extensively covered corruption by Karimova, who used threats and intimidation to extract bribes from foreign telecommunications firms seeking to operate in the country.

A 2015 investigation by the OCCRP found Karimova used her influence to shake down five foreign firms for more than US$ 1 billion in shares and payments.