Twitter
Serbian Prime Minister Aleksandar Vucic told N1 Television Sunday he has no information about who is behind the events of Moday last week, when about 30 masked men, armed with baseball bats, tore up multiple buildings in Belgrade using diggers, and mistreated several locals. 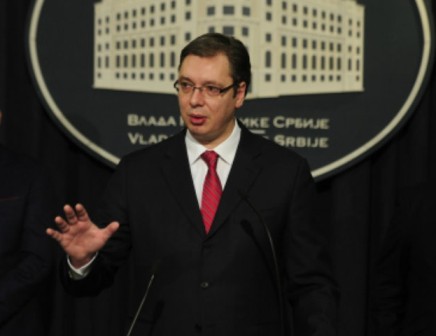 Aleksandar Vucic (Photo: KRIK)As the votes in Serbia's snap Parliamentary elections were being counted on the night of April 25, a group of masked men demolished parts of a Belgrade neighborhood using heavy machinery.

The complete video, which KRIK says lasts more than four hours, was captured by security cameras nearby.

KRIK reports that while the diggers were demolishing the buildings, several masked men were on guard, carrying their baseball bats and mistreating passersby. The masked men allegedly also tied up a security guard for a company located in the vicinity, and took away his mobile phone.
Among other properties, the perpetrators demolished the restoration “Savski Expres”, as well as properties in the ownership of the companies “Iskra” and “Transport Peroni”.
Owners of the demolished properties tried to contact the police repeatedly throughout the night, but according to KRIK, officers refused to react, telling the callers to contact another police unit.
KRIK's videos also show the street lights were shut down during the incident.
According to N1 Television, the same night when properties in Savamala were being demolished, the same thing happened to several buildings under the “Gazela” bridge, in the Braca Krsmanovic Street. A security guard reportedly said several masked men arrived  at the area in jeeps without license plates, grabbed him, took his phone, told him to run away and asked him if anyone else was present there. After clearing the area, diggers arrived and demolished two buildings. Police agreed to come to the scene of the crime, but reportedly left shortly after without providing explanation.
Last week, Commissioner for Public Information Rodoljub Sabic told journalists that when he demanded a response from city officials, he was told they have no information about the incident.
“The Mayor's response is unacceptable. The city authorities cannot just say, 'We are not involved and do not know anything'. They have a responsibility to the public,” BalkanInsight quotes Sabic.
Sabic also said that following his inquiries about the incident, he received anonymous threatening messages, pressuring him to stop asking questions. On April 30, Interior Minister Nebojsa Stefanovic said prosecutors issued a request for police to investigate the events.
The Savamala neighborhood is located at the river bank in Belgrade, where the government signed a project for the construction of the Belgrade Waterfront – a massive residential and office space complex, including the largest shopping mall in the Balkans.
According to BalkanInsight, Wednesday last week city authorities tore down a refugee aid center in Savamala in order to make way for the Belgrade Waterfront.
The Serbian government signed a contract for the construction of Belgrade Waterfront with a United Arab Emirates based company, Eagle Hills, in April last year.
Prime Minister Aleksandar Vucic has repeatedly expressed his support for the project, saying it is a major contribution for the development of Serbian economy.
According to BalkanInsight, however, the project caused controversy due to its lack of transparency. The government has also been accused of failing to meet relevant legal procedures in striking the deal, and censorship of opponents of the project.
At a Wednesday press conference, Belgrade mayor Sinisa Mali denied any involvement of any city institutions in the destruction of the properties in Savamala.
He did confirm that the area that was demolished is intended for the construction of the Belgrade Waterfront.