Clashes between protesters and police in SkopjeAnti-government protests were announced as part of a campaign by Social Democrat Party (SDSM) leader Zoran Zaev to prove that the country’s Prime Minister, Nikola Gruevski, ordered the illegal wiretapping of 20,000 citizens.

Protesters gathered on Tuesday calling for the resignation of Gruevski and his cabinet, but the focus of the demonstrations shifted towards police brutality after Zaev released tapes that appeared to feature Interior Minister Gordana Jankulovska admitting she knew of an attempt by police and several cabinet members to shield the murderer of 21-year-old Martin Neskovski.

Zaev then released additional recordings at another SDSM press conference on Thursday. The new tapes purported to prove that government officials had "deliberately conceal(ed) key information" about the death of journalist Nikola Mladenov.

The protest took a peaceful turn in the aftermath of the Tuesday violence and the number of protesters was reported to gradually decrease over the following days, from about 2,000 on Tuesday to 1,000 on Friday.

The course of the protests

The planned protests were originally by the SDSM on April 28, when Zaev published what he claimed was a list of people the

That list was just one in a long series of dossiers and recordings released at media conferences by the SDSM since February – material they say is evidence of corruption at the highest levels of the administration. Officials are accused of interfering with the judiciary and elections, as well as giving government jobs to members of Gruevski’s VMRO-DPMNE party.

Reaction was swift. Two days later, a state prosecutor indicted Zaev for "violence against representatives of the highest state bodies".

The SDSM has held 30 press conferences so far, and the party claims to have still more material to share.

Nikola GruevskiGruevski, the prime minister, has denied the wiretapping and corruption allegations, and stands by earlier statements that the opposition, in collaboration with unnamed foreign intelligence services, had created the wiretap recordings themselves to drum up support for a coup.

On Tuesday, up to 2,000 people clashed with Macedonian police in front of the government building, according to Reuters. Demonstrators set trash cans ablaze and threw stones at police guarding the building.

The Ministry of Interior says that 38 officers were injured, and 30 protesters were arrested that day. Police brought criminal charges against four people, two of whom they say were previously convicted for violence, robbery and drug trafficking. According to Balkan Insight, police used armoured vehicles and water cannons to disperse the protesters.

The SDSM released a statement condemning police brutality and claiming that police had beaten up "young students, women and innocent people".

Ruling party VMRO-DPMNE, on the other hand, released a statement from Gruevski accusing the opposition party of having a “destructive agenda towards principles of freedom and democracy”.

The same day, Zaev released recordings concerning the murder of Neskovsi, a 21-year-old who was killed during the 2011 VMRO-DPMNE election victory celebration. At the time, official sources said the young man’s body showed no sign of a violent attack. However, a number of witnesses said he had been beaten to death by special police – allegations that the ruling party, according to Zaev, tried to suppress.

It transpired that Neskovski had been murdered by Police Officer Igor Spasov, who was subsequently sentenced to 14 years On Wednesday, several thousand people gathered to peacefully protest police brutality and call for the resignation of Jankulovska, the interior minister, in front of the National Assembly building. Gruevski denied wrongdoing in the Neskovski case and said that the recordings that Zaev published had been cut and edited.

On Thursday, the Independent Balkan News Agency reported that police forces blocked access to the government building and public prosecutor’s office. Protesters moved to gather in front of the Parliament building instead. Some approached the row of special police forces to hand out flowers and offer them candy.

Thursday evening, a new set of “leaked wiretaps” included details abouta probe into the death of Nikola Mladenov, editor-in-chief of weekly magazine Fokus and a vocal critic of the Macedonian government. There is now a Macedonian journalism award named after Mladenov, who died in what was officially ruled a car accident in March 2013. His car had veered into a ditch on the outskirts of Skopje.

The newly released recordings appear to capture conversations between Jankuloska, intelligence chief Saso Mijalkov, and cabinet members, discussing flaws in how the government informed the public on the investigation into Mladenov's death. Among other things, Zaev pointed out that Mladenov’s body was said in the wiretap conversation to have been found by tracking his phone signal, but that investigators told the public that the phone itself was never found.

Zaev said that the death should not have been ruled an accident for several reasons, including the trajectory of Mladenov's car and the fact that CCTV cameras on the highway had not been working. The SDSM has demanded a new investigation. 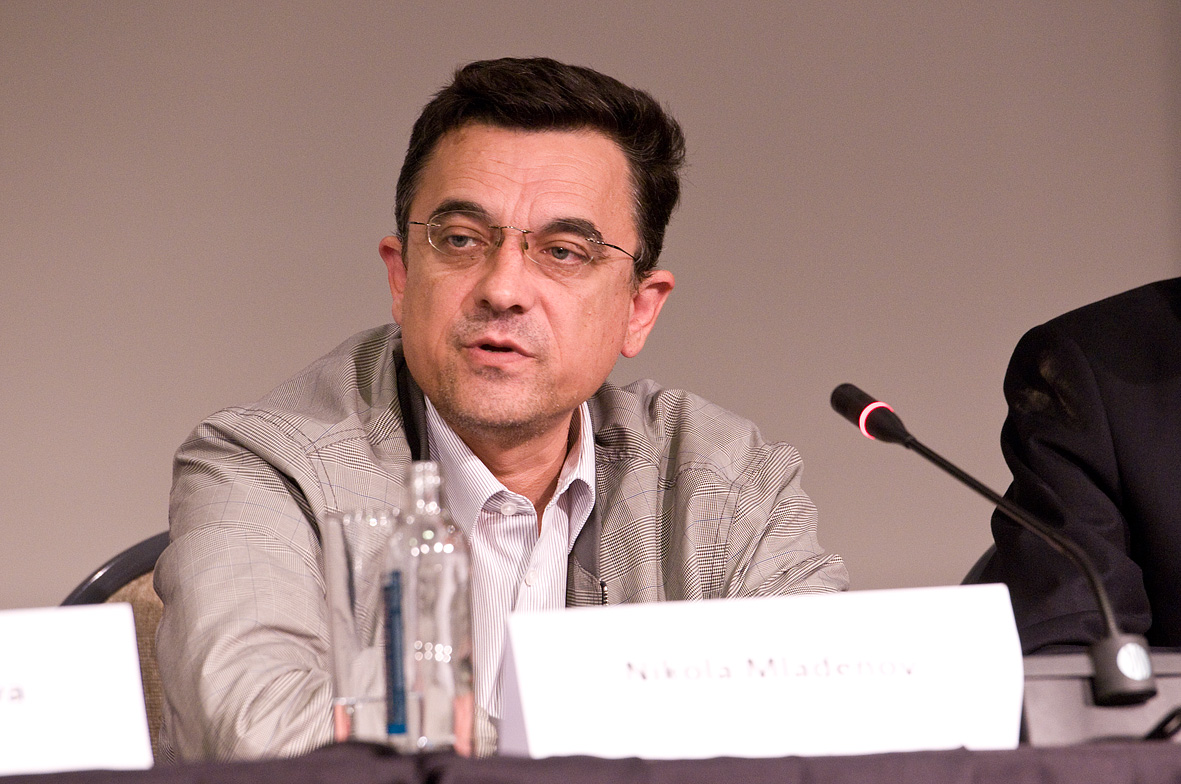 Nikola MladenovThe VRMO-DPMNE reacted the same day, thanking Zaev and the SDSM for publishing the tape. They said that it absolved them of responsibility in the incident and that they welcomed a new probe.

On Friday, about 1,000 people were reported by Independant.mk to have gathered in front of the Ministry of Foreign Affairs.

According to a website set up by the protestors, they continued to assemble throughout the weekend and on Monday with the same demands, but in much smaller numbers.

However, although the situation appears to have calmed, the opposition party says it will continue with its plans for protests on May 17 – which they say will last until the government resigns.

Opinions in the political sphere have polarized, with the government accusing the opposition of using this week’s rallies to destabilize the country and mount a coup. At the same time, the opposition has accused the police of brutality against protestors.

Macedonian media is just as split. Some local news websites such as “Kurir” criticize the protestors, saying that Macedonian society was being held hostage by “thugs”. Others, such as “Vest”, have published photographs of protesters behaving peacefully and even shielding police officers from violence.