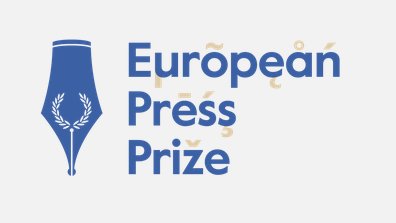 The Organized Crime and Corruption Reporting Project (OCCRP) has been honored by the European Press Prize (EPP) as a “force for good” in independent journalism, with the panel of judges giving the organization a special prize for achievement.

Executive director Paul Radu and regional editor Miranda Patrucic accepted the award on behalf of OCCRP at today’s ceremony in Copenhagen, where editors and journalists gathered to congratulate the finest in their field.

The EPP gives a series of annual awards for high-quality journalism that stirs public debate and holds power to account.

Two OCCRP projects were finalists for the Investigative Reporting and Innovation categories of the award. It was the third year in a row that OCCRP stories featured in the EPP shortlists.

Radu, along with the OCCRP team, was shortlisted in the Innovation category for The Russian Laundromat. This investigative story exposed the mechanism by which flows of illegal or “dirty” Russian cash were routed through Moldova and Latvia to emerge "washed clean" in central Europe.

Unholy Alliances was nominated for the Investigative Reporting prize. Patrucic worked with journalists Dejan Milovac of the Montenegrin organization MANS and Stevan Dojcinovic of the Center for Investigative Journalism Serbia (CINS) to reveal how the government of Prime Minister of Montenegro Milo Djukanovic was linked to organized criminals through personal ties and the bank owned by his family.

Radu dedicated the Special Award on behalf of the organization to Khadija Ismayilova, the OCCRP and Radio Free Europe-Free Liberty reporter now in jail in Azerbaijan. Human rights groups believe the charges against Ismayilova are politically motivated and linked to her journalistic work .

“The OCCRP, the judges said, is a memorably motivated, determined force for good everywhere it operates. Its members do not get rich, but the societies they serve are richer and cleaner for the scrutiny only true, independent journalism can provide,” said the EPP in a statement.

Drew Sullivan, OCCRP editor-in-chief, said: “We are delighted to get this special award from the European Press Prize jury. OCCRP reporters work hard in difficult situations and it’s always humbling when such distinguished colleagues acknowledge their accomplishments.”

Winners in other categories included the story “Your Husband Voluntarily Went Under Fire”, written by Elena Kostyuchenko for Novaya Gazeta, which topped the Distinguished Writing category. Ander Izagirre’s story “How to Produce Dead Guerrillas”, for El Pais, won the Investigative Reporting award.

At the ceremony, keynote speeches were given by Peter Wolodarski, editor of Swedish daily Dagens Nyheter, and Yevgenia Albats, editor-in-chief of Russian weekly magazine The New Times.