Ismayilova Convicted, Fined in Yet Another Case

In a closed-door trial on Monday, a Baku court convicted investigative journalist Khadija Ismayilova of libel and fined her 2,500 Azerbaijani manat (about US$ 2,417), according to Radio Free Europe/Radio Liberty (RFE/RL). 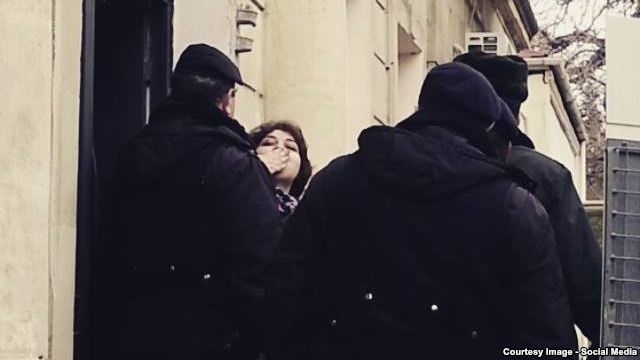 Khadija Ismayilova outside of the courthouseIsmayilova, an RFE/RL journalist and OCCRP partner, has been detained in Baku since Dec. 5 pending the outcome of several cases filed against her in recent months. She denies all charges, which human rights groups have denounced as politically motivated.

Her lawyer, Elton Quliyev, told RFE/RL that he would appeal the court’s ruling. The crime carries a possible sentence of three years in prison.

The Monday ruling stems from a complaint filed last year by former opposition activist Elman Hasanov, called “Turkoglu” in reports, who says she defamed him in statements on her Facebook page.

Ismayilova posted a document on her page purporting to be an agreement between the plaintiff and the Azerbaijani security services, under which he agreed to act as an undercover informant by infiltrating opposition political parties.

She noted, however, that she expunged all identifying information from the document before posting it.

Ismayilova has reported extensively on the financial dealings of members of Azerbaijani President Ilham Aliyev’s family, and international human rights groups believe she is being prosecuted in retaliation for her work as a journalist.

Since her initial detention, on charges of inciting a former colleague to attempt suicide, she has been charged with several other alleged crimes, including embezzlement, illegal entrepreneurship, and tax evasion, which carry penalties of up to 12 years in prison.

International rights groups have urged Stavros Lambrinidis, the European Union’s representative for human rights, to confront the Azerbaijani government during his visit to Baku this week over its treatment of Ismayilova and an estimated 100 other prisoners allegedly being held for political reasons.