Azerbaijan: Missing Human Rights Activist Has Been Holed Up at Swiss Mission for Six Months

The director of a human rights watchdog who went missing in August 2014 has been hiding at the Swiss Embassy in Baku, it emerged today. 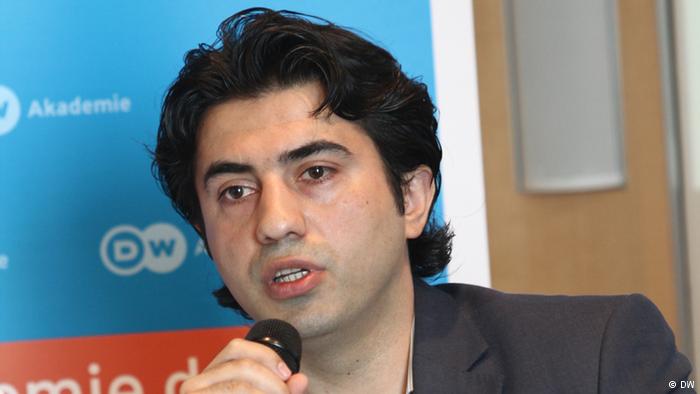 Emin HuseynovActivist Emin Huseynov, 35, a vocal critic of President Ilham Aliyev’s regime, has been trapped inside the embassy since Aug. 18 while a diplomatic standoff unfolds. Swiss officials say high-level bilateral talks with Azerbaijan’s leadership to broker a solution are ongoing.

Huseynov, a long-time dissident and founder of a media watchdog, took to the embassy after raids on his house as well as his office at the Institute for Reporters Freedom and Safety (IRFS), which he had set up to protect journalists and press freedom in Azerbaijan. Crackdowns on independent media have become fiercer in recent months in the oil-rich state.

In early August, Huseynov – who says he has suffered police beatings and threats dating back to 2003 – had also been slapped with a travel ban. Arriving at the Heydar Aliyev Airport on Aug. 5 to fly to Istanbul for medical treatment, he was refused passage by border officials. He claims he had received no documentation or warning of the ban.

According to Swiss TV station Rundschau SRF, which will broadcast its investigation into the case this evening, Huseynov presented himself at the Swiss embassy in Baku as a Swiss citizen, having succeeded only narrowly in escaping Azerbajiani police who arrived at the embassy door simultaneously.

The Swiss Federal Department of Foreign Affairs has issued a statement saying they will protect Huseynov on humanitarian grounds. However there is no immediate prospect of a resolution to the stalemate between the governments, and according to Rundschau, Huseynov’s relatives are fearful of attacks on the Swiss diplomatic mission.

Increasing the pressure on talks is the fact Huseynov suffers health problems including high blood pressure and a spinal injury that require urgent treatment.

His organization has been fined €166,000 and he faces criminal charges for abuse of office, tax evasion and illegal business – allegations that human rights organizations say are politically motivated.

As yet, no other foreign mission has spoken to offer Huseynov support or protection. The Swiss Embassy could not be reached by OCCRP for comment.

The escalating tensions between Azerbaijan and Switzerland come at a bad time for business deals between the states. Azerbaijan’s state oil company SOCAR recently took over Esso petrol stations across Switzerland, and Swiss energy firm Axpo has a stake in the Trans Adriatic Pipeline, delivering Caspian Sea gas to Europe.