While the United States is increasingly protecting its land borders from drug traffickers with robot technology, coast guard cutbacks are leaving sea lanes unprotected, illustrating the disjointed political nature of the US drug war.

One of the latest technological developments being employed along the US border is tunnel inhabiting remote control robots. As highlighted in a recent New York Times article, the robots are used to investigate the vast sewage and drainage pipe networks that traverse the United States and Mexico border, as well as seeking out tunnels dug by alleged smugglers. 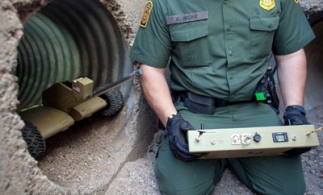 A US Border Patrol agent with a tunnel robot

The robots join the fleet of unmanned aerial vehicles -- commonly referred to as "drones" -- as part of an increasingly high-tech battle against drug trafficking along the 3,000 kilometer border between the two countries.

Yet at sea the United States is facing the challenge of diminished resources being available to interdict drugs trafficked through increasingly difficult to monitor sea routes. As highlighted by a recent Associated Press report, the rising use of the high seas combined with major cutbacks in US Coast Guard and naval resources means only about a third of suspected air and sea drug shipments passing through Caribbean and Pacific trafficking corridors were stopped in 2013.

The lack of coordination illustrates that the war on drugs is as much about politics as it is about interdicting drug supplies. While there is ample evidence that sea routes both through the Caribbean and the along the Pacific coast are becoming increasingly important -- with the latest AP report stating that the area of sea in which drug shipments were captured along the west coast of the United States tripled in 2013 alone -- the land border carries much greater symbolic importance.

Seen to represent the country's attempts to defend itself against not only drugs, but also illegal immigration and terrorism, the concentration of resources along the border could be taken to highlight how politics trumps law enforcement in drug interdiction policies.

SEE ALSO: Coverage of the Caribbean

Yet the fact remains that, even if resources were channeled according to drug shipment traffic, the sheer volume of drugs arriving into the country -- part of an estimated $60 billion domestic drug market -- means authorities will only ever manage to slow, rather than halt, the supply.

By Charles Parkinson, used with permission of InSight Crime