Ghana’s President on Monday dismissed the controversial Harvard Business School-educated Junior Finance Minister after he was implicated in trying to collect bribes from supposed investors. 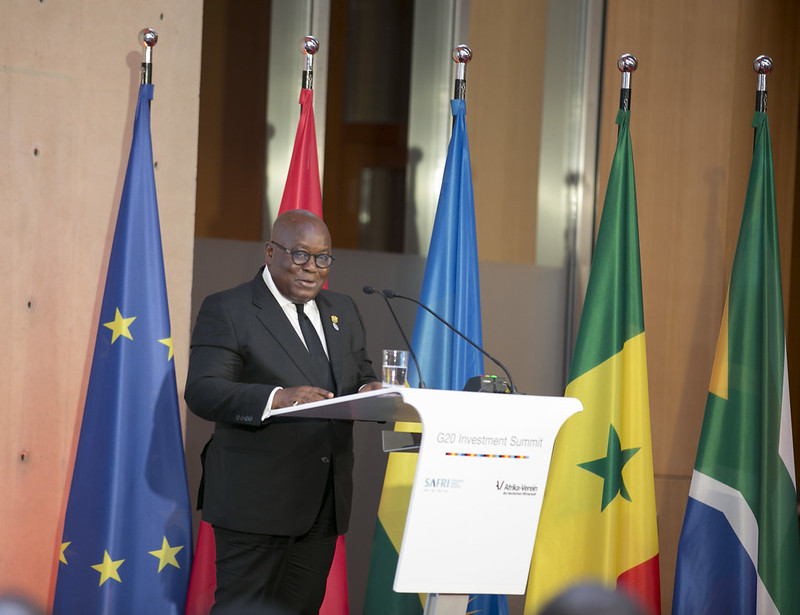 President Akufo-Addo took the decision to terminate Boahen’s appointment on Monday. (Photo: Paul Kagame, Flickr, License)The allegations against Charles Adu Boahen were raised in a new investigative documentary analyzing how corrupt deals are made in the Ghanaian political underworld, which was officially launched on Monday evening.

The documentary Galamsey Economy, named after a Ghanaian slang term for illegal gold mining, showed how Boahen asked investigators posing as investors for US$200,000 as a fee for Vice-President Mahamadu Bawumia to ensure political support for their venture in Ghana.

The deal was to include lucrative positions provided to Bawumia’s family. “You see, he has a big family. The Vice President has about five or six brothers and sisters,” Boahen was recorded saying.

As a reward for his services, Boahen asked for 20% of the invested amount, which was to be funneled into his real estate business.

The decision to dismiss Boahen was taken after President Nana Akufo-Addo was “made aware of the allegations leveled in the exposé” and spoke with the Minister, said President’s spokesman Eugene Arhin in a press release.

Bawumia defended himself on Facebook, saying that he was not aware of any such meeting. “My most cherished asset in life is my integrity and I will not allow anyone to use my name to engage in corrupt activities,” he stated.

Boahen did not immediately respond to OCCRP’s request for comment.

The matter was handed to the Special Prosecutor for further investigations, said the press release.

The first indications that Boahen might be abusing his political power came in August when it was brought to the public’s attention that Boahen’s Black Star Brokerage had been entrusted with the acquisition and sale of government bonds, despite having no market share and only very little experience in the field.

The allegations came out just as Ghana suffers its worst economic crisis in the past two decades, with inflation reaching over 40% and value of the Ghanaian cedi plummeting.

In recent weeks, Finance Minister Ken Ofori-Atta and Boahen, acting as his deputy, were under fire for their mismanagement of the economy. Even MPs from the ruling coalition called for their dismissal.

The pressure, however, eased at the end of October when the ruling coalition’s lawmakers agreed they would suspend their demand until a US$3 billion support loan from the IMF — hoped to stabilize the economy — was negotiated.

It is not yet clear whether Ofori-Atta will survive Boahen’s firing and how the turmoil in the government will affect the success of the IMF negotiations.