Paraguay Sentences Member of the Riviera Maya Gang to 8 Years

A court in Paraguay has sent a member of a criminal bank card cloning gang behind bars for eight years for taking part in the theft of more than US$1 billion from tourists visiting Latin America. 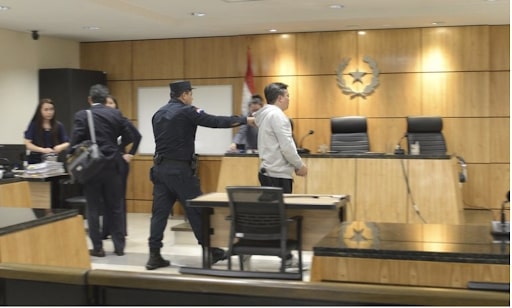 Julio Cesar Belmonte do Amaral, member of the Riviera Maya gang, before a court in Paraguay. (Photo: Tereza Fretes, ABC Color)Julio Cesar Belmonte do Amaral, was found to have been running the Paraguay operations of the Riviera Maya gang, which was named after the stretch of Mexican coastline where the group was operating. He will be serving his sentence in a penitentiary near the border with Brazil and Argentina.

After his accomplices, Marian Zarcu and Laurentiu Bota were arrested in Paraguay in 2016, Belmonte do Amaral was located in Argentina in 2017, then extradited to Paraguay, where he had been under house arrest for five years.

The trial of the Brazilian national began on August 10. During the five hearings, the court questioned several witnesses and was presented evidence, including proof that a vehicle registered in the name of Belmonte do Amaral was used by members of the gang.

The Riviera Maya gang installed special cloning devices into ATM machines, copying data of credit and debit cards people would be inserting to withdraw money. The device would read the magnetic stripe, allowing the gang to later withdraw money from the victim’s account. A micro camera they would also install in the machine recorded the pin numbers.

During the final arguments of the hearing on Wednesday, prosecutor Carlos Almada requested that Belmonte do Armaral be sentenced to a maximum of ten years, reaffirming his accusation of counterfeiting debit or credit cards and other electronic means of payment.

Defendant Lucía Franco asked for two years in prison and the time he spent under house arrest to be counted toward the sentence.

However, a three-judges panel found that Belmonte do Armaral really was a member of the gang. “The fair and useful sentence that the Court believes should be imposed at this time is eight years in prison,” Judge Marino Méndez said, when explaining the reasons for the sentence.

Belmonte de Amaral was handcuffed in the courtroom and sent to the Alto Paraná Police Department for later referral to the Ciudad del Este regional penitentiary.

"The danger of flight weighed heavily in the face of this conviction, the Court decided to revoke the house arrest," said the President of the panel.

Belmonte do Amaral is the brother-in-law of the gang’s leader, Florian Tudor, a Romanian gangster nicknamed “The Shark.” In 2020, OCCRP published an investigation into the group’s operations.