A wise thief can hear profit in the wind, or so the saying goes, but he cannot hear the silent alarm, nor the two policemen intently watching him from afar. 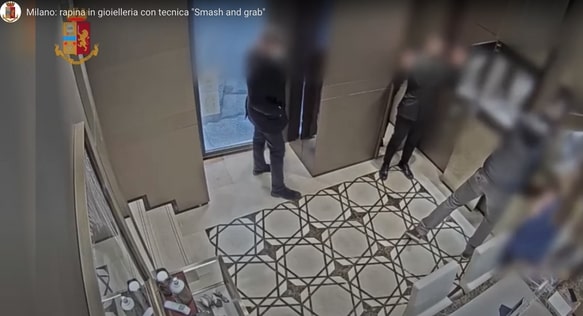 Described as “quick, violent, and precise” by Italian authorities, the Pink Panthers have established a reputation for themselves in Milan by methodically clearing out the city’s jewelry stores before the owners even have time to think.

Surveillance footage from several jewelers raided by the burglars show that they waste no time in their craft. Before they’ve even reached the entrance, the thief’s hammer is out and he immediately starts smashing through the reinforced glass while his accomplice keeps watch.

At another store, the moment the staff greet them at the door, the guns are already pointed at them as they are directed to open the secure safes, which are promptly emptied.

It took less than a minute for the thieves to clean out each store and leave before the police could have any chance to intervene, giving credence to the expression that opportunity plus instinct equals profit.

Another saying all thieves should know, however, is that they need to be lucky every time, while the police only have to be lucky once.

On Tuesday, in Milan’s shopping district, a police officer managed to recognize two men from surveillance footage which captured some of their prior heists.

With his partner, he proceeded to follow the two suspected Pink Panthers and watched them enter a building. When they exited several hours later, the thieves were stopped and searched, as was their apartment, where a third accomplice was discovered.

Italian authorities described the apartment as the gang’s lair, where they had everything in place to stage another robbery, such as fake guns with blanks to deter any heroics on the part of their victims, tools to calculate the thickness of a store’s display glass, and a map of the city.

Investigators say that the third member holds an international arrest warrant for murder as well as for illegally possessing weapons and explosives.

Apart from the three robberies shown in the footage, police have linked the three suspected Pink Panther members to no less than four others across Genoa, Rome, and Milan.