The U.K. announced on Wednesday sweeping sanctions against 178 individuals from the seperatist regions of Donetsk and Luhansk in eastern Ukraine, family members, close associates, and employees of Russian oligarchs and struck out major Russian Industries from metals to technologies. 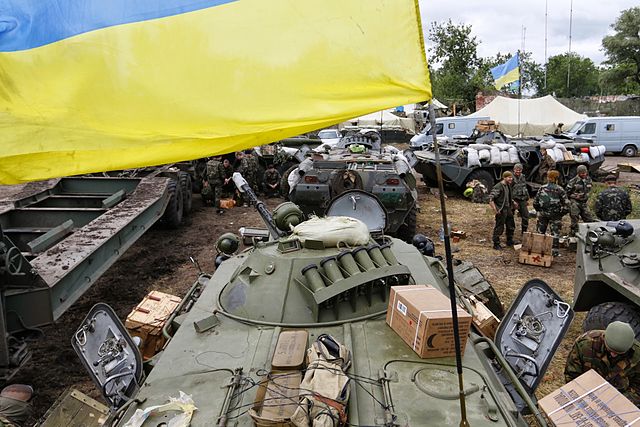 The sanctions imposed by the U.S., E.U and U.K. have thrown the Russian economy into disarray. (Photo: ВО «Свобода», Wikimedia, License)Among those sanctioned were the leaders of the Donetsk and Luhansk people’s republics, Alexander Ananchenko and Sergey Kozlov, the cousin of oligarch Oleg Deripaska, the secretary of Mikhail Fridman, the sisters of Alisher Usmanov, and the wife of Russian foreign minister Sergey Lavrov.

“In the wake of horrific rocket attacks on civilians in Eastern Ukraine, we are today sanctioning those who prop up the illegal breakaway regions and are complicit in atrocities against the Ukrainian people. We will continue to target all those who aid and abet Putin’s war,” Foreign Secretary Liz Truss said.

In addition to sanctioning the individuals, the U.K. also struck out major Russian Industries from metals to technologies.

From Thursday on, “we are banning the import of Russian iron and steel, as well as the export of quantum technologies and advanced materials that Putin sorely needs. We will not rest in our mission to stop Putin’s war machine in its tracks,” Truss said.

The new raft sanctions bring the total to over 1,400 Russia-affiliated individuals and businesses sanctioned by the U.K.

The sanctions imposed by the U.S., EU and U.K. have thrown the Russian economy into disarray according to the statement by the British foreign secretary’s office.

“Analysis shows Russia is heading for the deepest recession since the collapse of the Soviet Union with 275 billion pounds – 60% of Russian foreign currency reserves – currently frozen,” the statement said.