Western countries joined forces on Wednesday to track down the assets of the political and financial puppet masters in Moscow and seize or freeze their properties as part of ongoing efforts to help Ukraine fight the invasion. 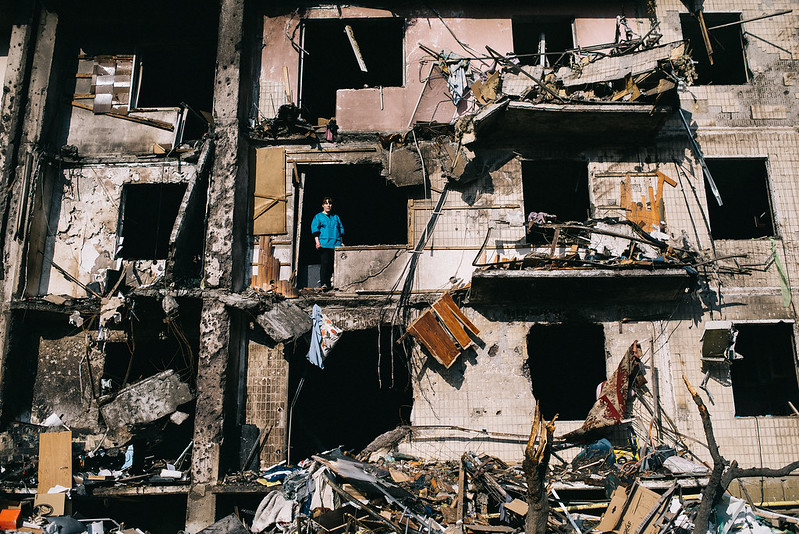 An apartment building in Ukraine destroyed in a rocket attack in the Russia's invasion of Ukraine. Responding with sanctions against the Kremlin-regime, Western countries joined forces to track down the assets of the political and financial puppet masters in Moscow and seize or freeze their properties as part of ongoing efforts to help Ukraine fight the invasion. (Photo: manhhai, Flickr, License)Australia, Canada, the European Commission, Germany, Italy, France, Japan, the United Kingdom and the United States launched the Russian Elites, Proxies, and Oligarchs (REPO) multilateral task force, which was announced last month, right after Russia invaded Ukraine.

By targeting those who are influencing the decision-making process in Moscow, the task force is supposed to help defend the borders of the member countries, and “to assist the Ukrainian government and people in their fight.”

The new body will gather finance and justice or home ministries from each member country, and “collect and share information to take concrete actions, including sanctions, asset freezing, and civil and criminal asset seizure, and criminal prosecution,” according to a statement from the U.S. Department of the Treasury.

Along with the REPO launch, the Financial Intelligence Units of Australia, Canada, France, Germany, Italy, Japan, the Netherlands, New Zealand, the U.K. and the U.S. increased their cooperation and intelligence sharing, according to Treasury’s Financial Crimes Enforcement Network (FinCEN).

The Treasury Department noted that cooperation between the U.S. government and its international partners has already resulted in the seizure of several vessels owned by sanctioned individuals and entities. The vessels are believed to be worth hundreds of millions of dollars.

“Our sanctions, trade restrictions, and other measures have already imposed significant costs on Russia, its leadership, and those who enabled Putin’s unprovoked invasion into Ukraine,” the Treasury’s Secretary Janet L. Yellen said at a virtual REPO members’ meeting.

She said that the task force will increase those costs by catalyzing concerted efforts to freeze and confiscate the targeted people’s assets all over the world and deny safe shelter for their ill-gotten wealth.

“We are already working with our international partners to freeze and seize properties belonging to sanctioned Russian oligarchs worldwide,” the U.S. Attorney General Merrick B. Garland said.

REPO can count on the help of Task Force KleptoCapture, which Garland established earlier this month in the U.S. as an interagency law enforcement initiative that is mandated to enforce the sanctions and export restrictions imposed on Russia in response to its invasion of Ukraine.

The REPO members discussed how to guarantee the effective and coordinated implementation of the group’s collective financial sanctions against Russia, as well as how to help other countries in locating and freezing assets held inside their territories, according to the U.S. Treasury.

The task team also considered how forfeitable the frozen assets, or other assets related to these sanctioned individuals or businesses, are as well as how to “bring to justice enablers and gatekeepers who have facilitated the movement of sanctioned assets or other illicit funds.”

To start the REPO activities, the Treasury Department shared a list of 50 individuals the U.S. considers priorities.

Russian President Vladimir Putin and his close associate, Russia’s Foreign Minister Sergey Lavrov, are among the 28 individuals on that list whose names were publicly released. Some of the others were Russian oligarchs Oleg Deripaska, Yevgeny Prigozhin, Alisher Usmanov, Arkadiy and Boris Rotenberg, Nikolay Tokarev or Igor Sechin.

In addition to REPO, the Treasury Department also launched the Kleptocracy Asset Recovery Rewards Program, which offers up to $5 million for “information leading to seizure, restraint, or forfeiture of assets linked to foreign government corruption, including the Government of the Russian Federation.”