Thanks to social media, the Spanish National Police recovered over 400 looted archeological pieces spanning several historical periods and going as far back as the Bronze Age. 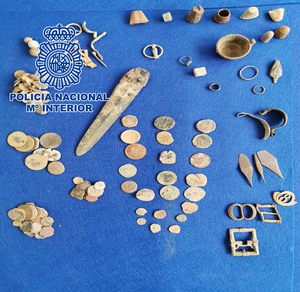 Thanks to social media, the Spanish National Police recovered over 400 looted archeological pieces spanning several historical periods and going as far back as the Bronze Age. (Photo: Policía Nacional, Spain)Police reported on Tuesday that part of the investigation involved officers infiltrating social media forums that exchanged information on illicitly obtained historical items, which had been plundered from their sites of origin.

Amongst the most remarkable pieces were a knife and a halberd dating back to the Bronze Age, which spanned between the second and fourth millennia BC.

These forums led investigators to an individual in the province of Albacete who had posted pictures of the knife believed to have been made between three and five millennia ago.

In probing the forum for additional information on the knife, authorities were able to elicit a response from another user in the city of Cuenca who reportedly showed them photos of a halberd in his collection from the same historical period.

Upon verifying the owners’ locations, representatives of the Historical Heritage Brigade took the objects into their custody.

In Cuenca, authorities were ultimately able to recover 156 artifacts that spanned across several historical periods.

In Albacete, meanwhile, agents recovered 246 artifacts, including weapons, coins, and some pieces from the Napoleonic era. The pieces have since been relocated to the Provincial Museum of Albacete.

This was the second time in two weeks that Spanish authorities recovered archeological artifacts of great historical value.

A week ago, police similarly recovered from looters an Iberian falcata - a sword widely used by warriors across the Iberian peninsula over two millennia ago.

Such swords were used against the Roman armies to great effect, given the curved falcon-shape of the blade and the quality of iron used to forge them.

Like the knife and halberd, police located the falcata on a social media forum. Upon verifying the weapon’s authenticity, officers recovered it and took its holder into custody.

Historically, upon the death of the warrior to whom the falcata belonged, its blade would be bent to render it useless before being entombed along with its owner.

This particular falcata, however, was found with its blade intact, which reportedly signifies that it holds a substantially higher value.

In addition to the sword, authorities were also able to retrieve from the suspect over 200 other archeological pieces of great historical value.