Spain’s National Police and tax authorities have seized 680 kilograms of hashish from a pleasure boat along the Costa del Sol, officials reported on Monday. 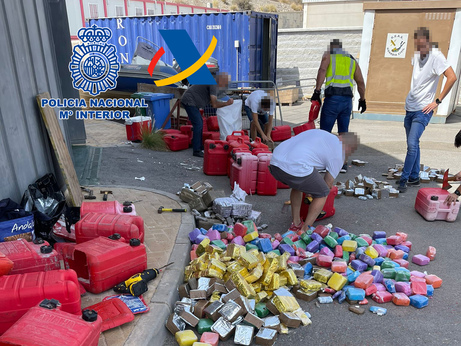 Spain’s National Police and tax authorities have seized 680 kilograms of hashish from a pleasure boat along the Costa del Sol. (Photo: Policia Nacional, Spain)Authorities spotted the boat in August, noting it lingered off the Moroccan coast until nightfall before crossing the Mediterranean to the Spanish port of Almería.

Agents intercepted and boarded the vessel, where they discovered the drugs hidden inside 30 gasoline canisters and arrested the crew, comprised of two suspects of British and Dutch nationality.

The seizure is the third phase of an investigation that began in 2019, when Spanish authorities learned of a Franco-Moroccan drug trafficking network operating along the country’s southern coast.

The suspects subsequently abandoned the boat on shore. Police recovered the gas canisters and discovered 222 kilos of hashish concealed within.

At the end of 2020, a Tax Agency Customs Surveillance team boarded a separate vessel and discovered the crew had a document with geographic coordinates written on it. Upon interrogating another suspect detained on land in possession of a similar document, authorities determined the coordinates to be a rendezvous point for handing off the drugs.

A search of the yacht’s gas canisters revealed an additional 621 kilos of hashish.

Police have so far made 14 arrests in the course of dismantling the network.