Only 17 months into office, Malaysian Prime Minister Muhyiddin Yassin announced his resignation on Monday after losing majority support in parliament following months of political turmoil and apparent pressure from current and former officials accused of graft. 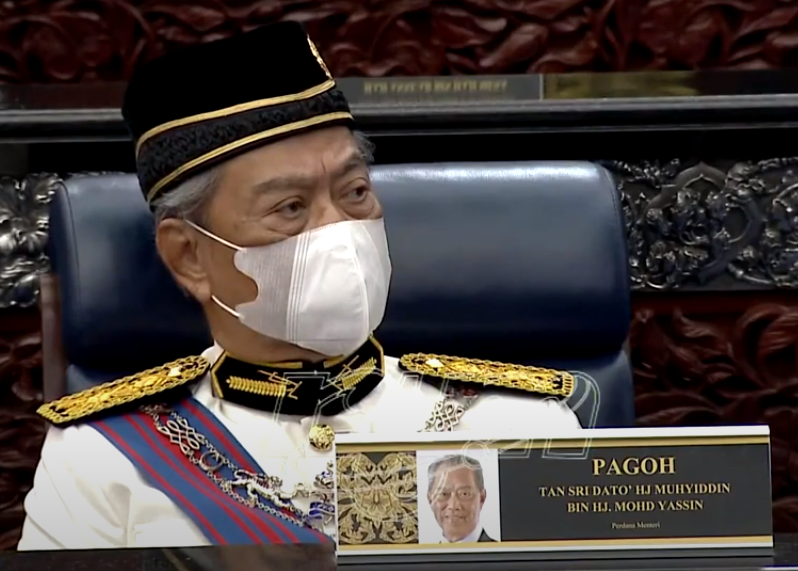 No clear successor has emerged yet, and Muhyiddin will remain in a caretaker position until the next Prime Minister is appointed. (Photo: TV PAS, Wikimedia, License)“I will never work with kleptocrats, interfere with the independence of the judiciary, and turn my back against the Federal Constitution just to stay in power,” Muhyiddin said in a public address on Monday.

The comment has been interpreted as a dig at a group of high-ranking government officials in the United Malays National Organisation (UMNO) party who are known collectively as the “court cluster.”

Several influential members of the group, including former Prime Minister Najib Razak and party president Ahmad Zahid Hamidi, are facing graft charges. They were among those who withdrew support for Muhyiddin earlier in the month.

Muhyiddin held onto shaky political support from the start of his term as prime minister in March of 2020, but his razor thin majority margin dissolved earlier last week amid political chaos. COVID-19 cases in Malaysia have skyrocketed this summer, so the public has grown increasingly dissatisfied with the government’s pandemic response.

The palace confirmed that Sultan Abdullah of Pahang accepted the letter of resignation from Muhyiddin and the rest of the cabinet on Monday.

No clear successor has emerged yet, and Muhyiddin will remain in a caretaker position until the next Prime Minister is appointed. That means that he will effectively continue to manage government affairs, but he’s not expected to implement significant new policies.

Muhyiddin, who is 74, was once a member of the UMNO party but soon departed for the Malaysian United Indigenous Party amid the notorious 1Malaysia Development Berhad (1MDB) case that implicated dozens of Goldman Sachs business executives and corrupt government officials, including Razak, in a looting and laundering scheme that shook up the financial world.

Muhyiddin is the shortest serving prime minister in the country’s history.