Lebanese police used on Wednesday tear gas and batons against protesters, mainly relatives of the victims of last year’s fatal Beirut port explosion, who demanded that justice take its course and Amnesty International called on authorities to “immediately” lift all immunities protecting the officials suspected of being linked to the blast. 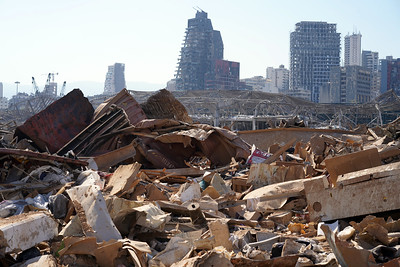 A year on, little progress has been made in the blast's investigation, and the judicial probe has been riddled with impunity, obstruction, diminishing faith in local authorities. (Photo: Lisa Hastert, EU Civil Protection and Humanitarian Aid, Flickr, License)“Lebanese authorities have failed to hold anyone to account for the August 2020 blast, which killed 217 people and forcibly displaced more than 300,000 following severe damage to tens of thousands of homes,” the human rights watchdog said, accusing authorities of obstruction of justice.

Protesters took to the home of Interior Minister Mohammed Fehmi to object his rejection of Judge Tarek Bitar’s request to investigate the head of General Security Directorate, Major General Abbas Ibrahim - despite telling local media on July 2 that he would grant permission.

The Lebanese Red Cross said it had dispatched four teams to the scene to treat the injured, while the Internal Security Forces said a number of security officials were assaulted in the clash.

Amnesty International’s Deputy Director for the Middle East and North Africa, Lynn Maalouf called the protests a “stark illustration of the pain families feel at the authorities’ failure to move forward with an impartial and effective investigation.”

But a year on, little progress has been made, and the judicial probe has been riddled with impunity, obstruction, diminishing faith in local authorities, and consistent calls for an international investigation.

“The post-conflict era has been marked by entrenched impunity that has pervaded every aspect of the lives of people in Lebanon,” Maalouf said, adding that “a truly impartial and independent investigation into the Beirut Port explosion is essential for building a better future for Lebanon, in which human rights are protected and justice is upheld.”