The European Commission fined last week German carmakers Volkswagen and BMW a total of 875 million euro (US$1.03 billion) for conspiring to limit the use of emissions-cleaning technology the two companies had developed. 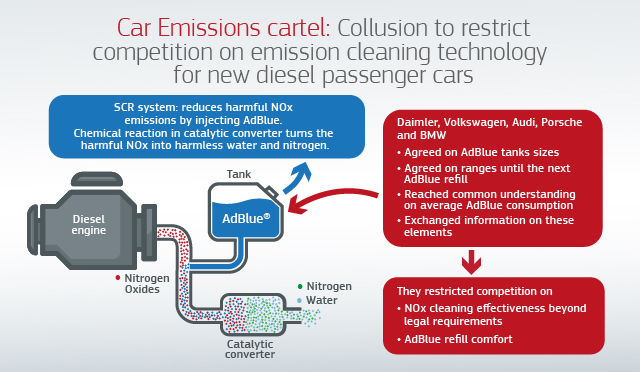 “The five car manufacturers — Daimler, BMW, Volkswagen (VW), Audi and Porsche — possessed the technology to reduce harmful emissions beyond what was legally required under EU emission standards. But they avoided to compete on using this technology's full potential to clean better than what is required by law,” Executive Vice-President of the Commission in charge of competition policy, Margrethe Vestager, said.

She emphasized that competition and innovation in automobile pollution management are critical for Europe to fulfill its ambitious Green Deal goals — a set of the European Commission policy initiatives with the overarching aim of making Europe climate neutral in 2050.

“This decision shows that we will not hesitate to take action against all forms of cartel conduct putting in jeopardy this goal,” Vestager said.

The Volkswagen group will settle the case by paying 502 million euro ($593.25 million), while BMW will pay a fine of 373 million euro ($440.8 million). Daimler has not been fined, as it blew the whistle and “revealed the existence of the cartel to the Commission.”

During those meetings, from June 2009 to October 2014, the three car manufacturers conspired to avoid competition on cleaning better than what is needed by law, despite the availability of necessary technology, according to the European Commission.

It explained that Daimler, BMW, and Volkswagen Group achieved an agreement on AdBlue tank sizes and ranges, as well as an agreement on the average anticipated AdBlue usage.

“They also exchanged commercially sensitive information on these elements. Theythereby removed the uncertainty about their future market conduct concerning NOx-emissions cleaning beyond and above the legal requirements (so called “over-fulfilment”) and AdBlue-refill ranges,” read the statement.

This is how the companies limited competition on product attributes that were important to customers.

While BMW stated that the “European Commission has once again confirmed that the investigation concluded with this settlement solely concerned possible infringements of competition law… and that there is no indication of collusion between the parties relating to the use of prohibited defeat devices to manipulate exhaust gas tests,” Volkswagen officials believe that the penalty imposed for technical discussions regarding emissions technologies with other automakers establishes a dubious precedent.

“The Commission is entering new judicial territory, because it is treating technical cooperation for the first time as an antitrust violation,” VW representatives said, according to Reuters.

The German manufacturer said the European Commission is imposing sanctions although the substance of the discussions was never implemented and no customers were harmed as a result.

“The high fines imposed in this case underscore the need for more comprehensive guidance from the Commission to ensure that legal uncertainty does not hamper innovation in Europe,” VW concluded.