A federal court in Brazil acquitted former president Michel Temer (2016-2018) on Wednesday after finding there wasn’t enough evidence to support the prosecution's claim that he had led a criminal organization which facilitated bribery. 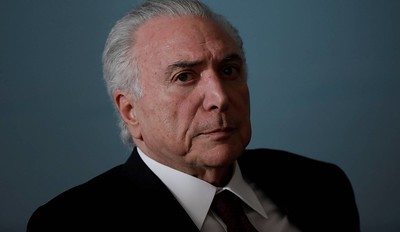 This is the second time in less than two months that Brazilian justice acquitted the former president in a case related to graft. (Photo: Jeso Carneiro, Flickr, License)In 2017, Brazilian prosecutors accused Temer and about ten members of his political party, the Brazilian Democratic Movement (PMDB), of being involved in the kickback scheme that ran since 2006 and involved Petrobras, Brazil’s chamber of deputies, a bank and two ministries.

Police investigations claimed then that Temer had received 31.5 million reais (nearly US$6 million) in bribes.

But Federal Judge Marcus Vinicius Reis Bastos acquitted Temer this week and said there’s no evidence that he knowingly had constituted a hierarchical criminal organization, as the report from the Prosecutor’s Office suggested.

The court also acquitted the other politicians mentioned in the investigation and which occupied seats at the Congress and several ministries.

“The accusation presented, in fact, translates into an attempt to criminalize political activity,” Reis Bastos said in the court ruling.

“The indictment of political leaders for organized crime offenses without objective and subjective elements causes harmful effects to democracy, including a severe credibility and legitimacy crisis of political power as a whole,” the ruling reads.

Temer, who served as vice president during Dilma Rousseff’s mandate and came to power after her destitution, has faced corruption allegations several times over the past years.

This is the second time in less than two months that Brazilian justice acquitted the former president in a case related to graft.

Last March, Reis Bastos acquitted Temer in a separate case in which the former president was accused of receiving bribes in exchange for granting lucrative contracts to companies in the port sector.

Brazilian justice also concluded then that the Prosecution Office didn’t provide enough evidence to convict Temer and five others.

Temer, now 80, spent days in preventive detention in 2019 as part of a separate probe that connected him to a graft case involving a nuclear power plant.

Prosecutors alleged that he received hundreds of thousands in bribes from the construction company Engevix in exchange for a contract to build a nuclear power plant in the Rio de Janeiro state.

Brazil’s former ruler described his arrest as a ‘kidnapping’, saying that is was part of an arbitrary decision.