Anthropologists and indigenous rights defenders have called on Brazilian authorities to punish those who have been in recent weeks spreading anti-vaccination misinformation among Indigenous people, prompting parts of that population to refuse the COVID-19 vaccine in multiple regions across the country. 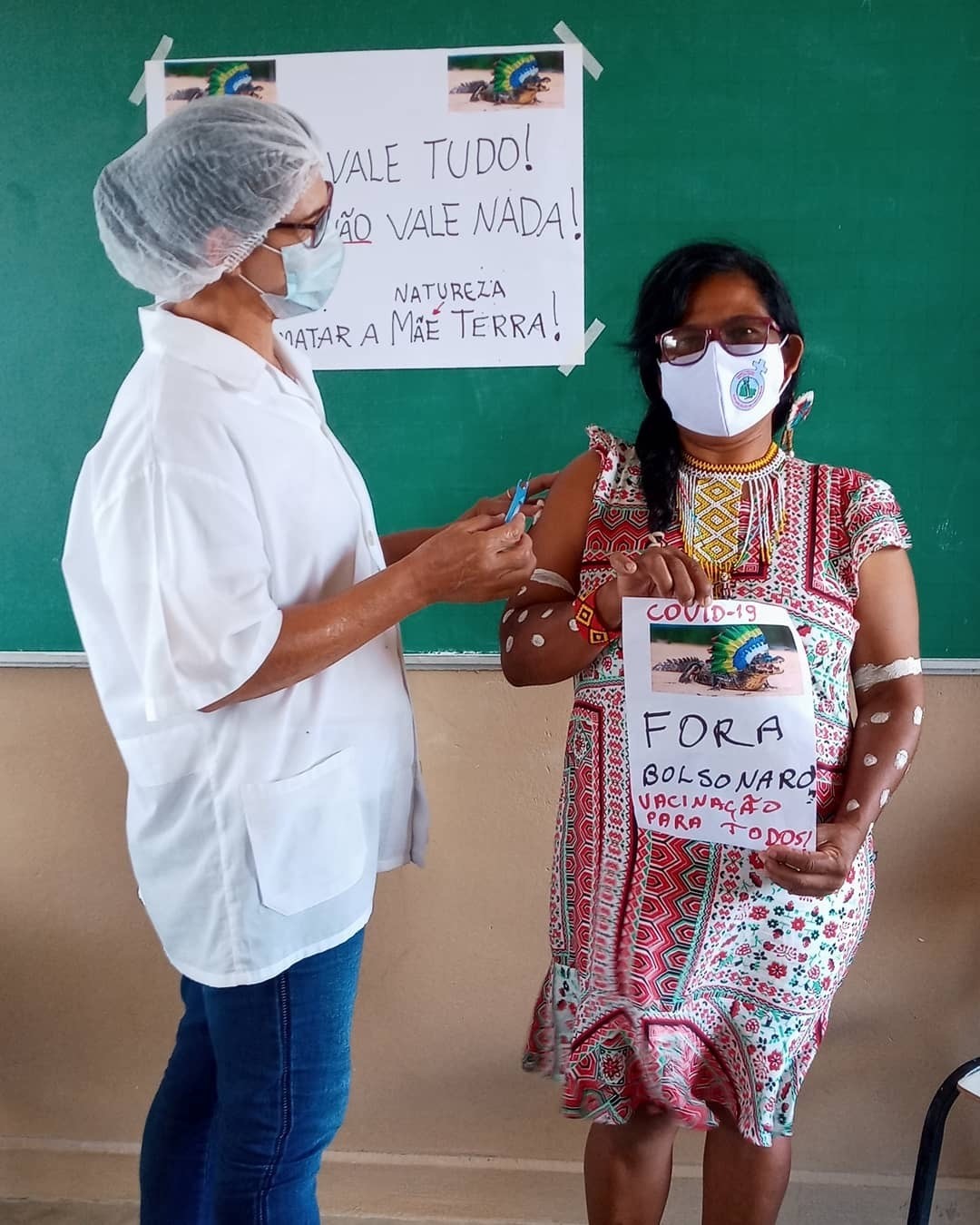 A Pankarau woman receives the COVID-19 vaccine and shows a sign picturing a crocodile with an Indigenous headdress, the page reads: “Bolsonaro is vaccinating for all” in a jab at the Brazilian President’s comments that the vaccine may turn people into crocodiles. (Photo: The Pankarau People)“The vaccine implants a chip” and “the vaccine gives cancer” read some of the messages experts claim were circulated via WhatsApp and Telegram by evangelical missionaries as part of an coordinated and criminal effort to deceive Indigenous communities which, advocates say, parallels the dangerous rhetoric of President Jair Bolsinaro.

The Association of Brazilian Anthropologists (ABA) and the Brazilian Articulation of Indigenous Peoples (ABIA) appealed to the Federal Public Ministry (MPF) to “guarantee the punishment” of the people behind the messages.

“The policy of disseminating false information about the vaccine began with the federal government itself, in particular the president of the republic, who has a distorted political-ideological view of reality, a negationist, destructive view,” said Antônio Eduardo Cerqueira de Olivera, Executive Secretary of the Indigenous Missionary Council (CIMI) an organization which has been working to combat the fake news campaign.

Indigenous populations have been refusing the COVID-19 vaccine apparently under influence of false claims that they were being used as “guinea pigs'' and that other Indigenous people had died after receiving the vaccine.

ABA and ABIA’s letter outlined the harm the spread of false information could do to Indiginous communities, describing the effort as “a criminal act, as it puts lives at risk deliberately. In addition to creating and feeding states of panic and individual and collective disorientation, that can lead to cases or even a wave of suicides.”

Some of the anti-vaccination ideas circulating among members of that population belong to pentecostal televangelist Silas Malafai, according to an analysis of the problem written for the Observatory for Human Rights of Isolated Indigenous People and of Recent Contact by Miguel Aparicio who holds a PhD in Social Anthropology.

Bolsonaro, OCCRP’s reigning corrupt person of the year, and Malafaia are reportedly close. The two are frequently photographed together and Malafai officiated Bolsonaro’s wedding to Michelle Bolsonaro in 2013.

Malafai did not respond to requests for comments.

Bolsonaro’s anti-vaccination rhetoric also reached Indigenous villages, according to Cerqueira de Olivera, who said there were reports that the vaccine side effects can turn a person into an animal, a comment made by the president when expressing skepticism about the Pfizer vaccine, reported France24.

Theories on the motivations behind these acts differ somewhat. The broader echoing of anti-vaccination sentiments by pentecostal evangelicals supports and gives credence to the Bolsonaro government, especially its controversial policies regarding the Indigenous population,  according to Cerqueira de Olivera.

“By adhering to the federal government’s integrationist policy and by dismantling the fight of Indigenous Peoples for their constitutional rights, in particular the rights to their territories and their autonomy, the actions of these Neo-pentecostal churches are connected with the project of the federal government for which they are created and financed,” said Cerqueira de Olivera.

Aparicio looked to history to explain the “why” writing that access to healthcare has been used as a means of control by Christian missionaries in the Amazon for decades. He suggested that any healthcare independent of the church, such as the inoculation teams delivering the vaccine, was a threat to the recruitment strategies of the church.

“Immunization, the result of scientific research and public policy, did not arrive as a divine sign, Aparicio said in his analysis. “After all, faith, which heals and protects, is enough.”