Like soccer players all over the world, the forwards, midfielders, and defenders of the Gomoa Fetteh Youngsters club spend their days practicing drilling, passing and attacking the rival’s net while keeping the ball away from their own. 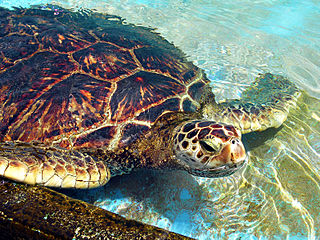 Historically, beaches in Ghana have been home to the nesting grounds of five species of sea turtles. Today, only three species remain. (Photo: PiccoloNamek, Wikipedia, License)But when night falls, they all become defenders, patrolling the Ghana’s beaches to protecting sea turtles from poachers.

For the past two years, the athletes have been guarding the turtle’s nesting grounds on the beaches of Gomoa Fetteh where female turtles come ashore to lay their eggs. Because of their constant presence at the beach as well as their awareness campaign in the village, the number of turtle poaching incidents have dropped nearly 50% during this year’s  nesting season, measuring from September to late-December, compared with the previous year, the Environmental Justice Foundation said on Friday.

“Compared to the past nesting season, we are elated with the season so far with much increased numbers of successful nesting turtles at the two nesting beachfronts,” patroller Kow Amissah told the EJF.

Historically, beaches in Ghana have been home to the nesting grounds of five species of sea turtles. Today only three species, all classified as vulnerable or endangered by the International Union for Conservation of Nature (IUCN), can be seen on the shores of Gomoa Fetteh. All turtle species are protected under Ghanain law according to EJF.

These turtles are vital to protecting the marine ecosystem and local fishing economies which around 10% of the population in Ghana rely on for food and income, according to EJF. Leatherback turtles eat jellyfish, helping to control the predator and replenish fish populations in the region.

The high prices of turtle meat and the often limited economic opportunities in coastal Ghana due to overfishing means protecting the sea turtles from poachers is not so simple.

Steve Trent, Executive Director of EJF said that many poachers live and work in the community, taking the opportunity for extra income and food for their families if they see a turtle coming ashore to nest. Fishers will often sell turtles that get caught in their nets accidentally, using the extra money to repair nets damaged by the large animals.

To combat this, the Gamoa Youngsters and the EJF kept an open dialogue with poachers, fishers, and turtle processors in the community to try and find the root causes of turtle poaching in the area and work together to find more sustainable solutions to the economic hardship the community faces.

In the last season, the Gomoa Youngsters rescued three turtles that had been taken by poachers while attempting to nest and negotiated the release of a fourth from the net of a fisherman.