Russian authorities detained more than 5,400 people who protested on Sunday in some 150 cities across the country, demanding freedom for top Kremlin critic, Alexei Navalny, an independent monitoring group reported on Monday. 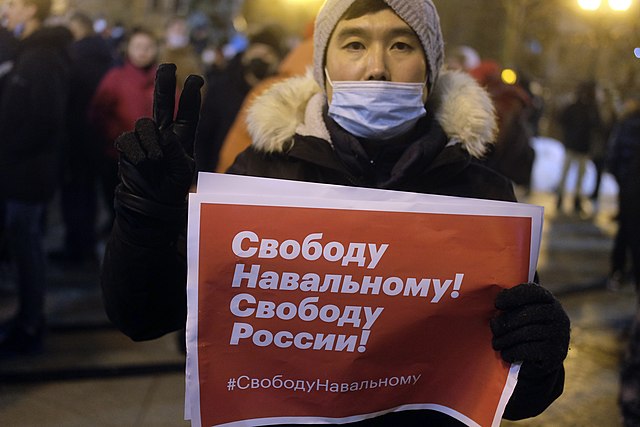 Freedom to Navalny, freedom to Russia! Protests in Moscow in support to Kremlin critic, Alexei Navalny. (Photo: Sergey Korneev, Wikimedia, CC BY-SA 4.0),Moscow and Sankt-Petersburg, according to OVD-Info, top the list with more than 1,800 protesters detained in the Russian capital and more than 1,200 rounded up in Sankt-Petersburg.

Tens of thousands of protesters gathered across Russia during the weekend in support of Alexey Navalny, who was arrested mid-January upon his return from Germany, where he was recovering from a poisoning attack allegedly conducted by Russian intelligence back in August.

“Thank you everyone, from Kaliningrad to Petropavlovsk-Kamchatsky! You’re amazing!” Navalny wrote on Facebook next to a clip showing the protests in Moscow.

Navalny also informed his supporters that Moscow’s Simonovsky District Court will decide on Tuesday whether his probation sentence will be replaced with the regular one, in which case he could face years in jail.

Prior to the weekend protests in Russia, Navalny called on his supporters to be brave and reminded them of a fairy tale in which a cockroach called on all animals to bring their children so it can eat them for dinner.

“The animals fainted in terror, although deep down they knew that a cockroach would not be able to eat a hippopotamus,” Navalny wrote comparing the story with the current situation in Russia.

“Now a handful of thieves who have put on uniforms, shoulder straps and epaulettes, placed their Tsar on the throne and announced to 150 million people that they are the law now, that they will declare illegal whatever they dislike and will arrest people,” he wrote.

Also, detention did not prevent Navalny to publish two weeks ago his latest investigation that includes a video titled “Putin Palace” (Дворец для Путина), where he accused the Russian president of outrageous corruption and greed.

In the latest twist, Arkady Rotenberg, one of the wealthiest businessmen in Russia, and a childhood friend of Vladimir Putin, admitted the $1.5 billion palace actually belongs to him.

In an interview with the Russian Mash TV, on the Telegram communication platform, the controversial businessman confirmed the ownership of the property near the Black Sea resort of Gelendzhik.