A court in El Salvador found Ex-President Elias Antonio Saca and his wife, Ana Ligia de Saca, guilty of illicit enrichment on Tuesday and ordered them to pay back the US$4.4 million they diverted from state funds to their personal and business accounts. 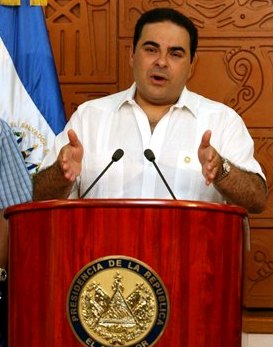 El Salvador's ex-president, Antonio Saca, during his visit to Mexico in 2007. (Photo: Presidential Office archive)The Public Prosecutor had indicted the former president and the former first lady after the two  failed to explain the origin of more than $5 million on their accounts.

The court’s ruling, which is still appealable, ordered Saca to return $3,832,698 to the state and banned him from running for public office for ten years, according to the media in El Salvador. His wife will have to repay $589,608.

“(The fact) that officials and presidents of the past stole is known to all,” said El Salvador’s general attorney, Raul Melara, on Twitter after the court’s decision. “We are working so that they pay for their crimes and the money is used for the benefit of Salvadorans.”

Saca, who ruled the Central American country between 2004 and 2009, is already serving a ten-year prison sentence. He was arrested in 2016 for his alleged part in a corruption scheme that involved other government officials, including his former private secretary, Elmer Charlevoix.

In 2018 Saca confessed to having been responsible for $260 million out of the $300 million the group was accused of having diverted from state funds to themselves and became the first Salvadoran ex-president to be convicted of corruption. He was ordered to return the $260 million to the state.

However, Saca is not the only Salvadoran ruler who was found guilty of corruption or illicit enrichment.

In November 2017, his presidential successor Mauricio Funes (2009-2014) was convicted in absentia of illegal enrichment and ordered to pay, along with his son, nearly $420,000 in restitution to the government after they failed to prove the origin of the sum.

Funes sought asylum in Nicaragua in 2016, claiming he had suffered political persecution.

Francisco Flores, who ruled El Salvador before Saca, was indicted for diverting $15 million in aid money from Taiwan after two earthquakes devastated the country in 2001, but died before the matter was resolved.