The former president of El Salvador, Antonio “Tony” Saca, was sentenced in a Salvadoran court Wednesday to 10 years in prison after he pleaded guilty to diverting more than US$300 million in state funds to his own businesses and third parties, the Associated Press reported. 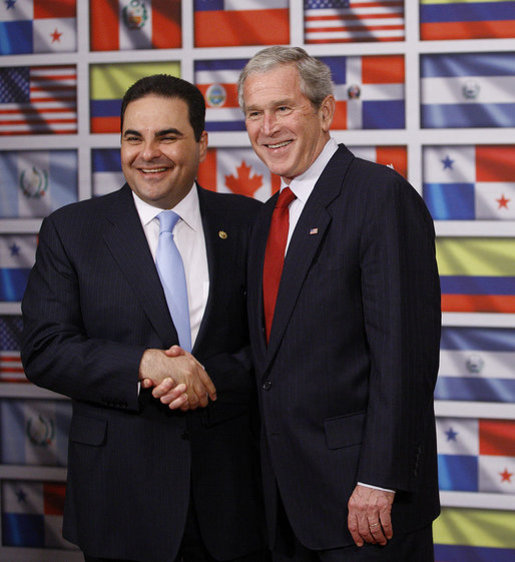 Former President Antonio Saca (left) with Former President George W. Bush in 2008 (Photo: Eric Draper, White House Archives)Saca, 53, a member of the conservative Nationalist Republican Alliance party known by its Spanish acronym ARENA, served as president from 2004 to 2009 and is the first Salvadoran ex-president to be convicted of corruption.

Saca and five of his associates including his former private secretary, Elmer Charlaix, pleaded guilty in exchange for reduced sentences. Both Charlaix and Saca faced 30 years before the plea deal, and each received five years for embezzlement and five years for money laundering, to be served consecutively.

“We are satisfied with the conviction, the criminal responsibility that has been imposed on the defendants, as well as the civil judgment,” prosecutor Jorge Cortez said. The case against Saca, however, has not been closed, he said. “We are going to strengthen investigations that are underway.”

Allegations of corruption against Saca, a former radio sports announcer, stretch back years. A secret cable sent by the US Embassy in San Salvador to Washington, later released by WikiLeaks, says that even those within Saca’s own ARENA party believe the president’s abuse of power “went beyond the pale.”

Saca had expensive tastes, raising US Embassy eyebrows with his 5,024-square-meter (54,077 square feet) mansion - for scale, slightly larger than the smallest FIFA soccer field - that sits just over 1,000 meters (3,280 feet) above sea level on the eastern slope of the volcano of San Salvador, and commands sweeping views of the capital city below.

The mansion nestles in a grove of pine trees, and a semicircular staircase wends down the main facade, which looks down on the city, to a lavish garden, pool, and jacuzzi.

According to the online newspaper El Faro, Saca bought the mansion for $2.1 million from a company owned by the Salume family. Two members of that family, Nicolás Salume Barake and his son Nicolás Salume Babún, both now deceased, were close to both Saca and Mauricio Funes, Saca’s successor as president. Months after he took office, Funes asked the Legislative Assembly to appoint Salume Barake second in line to the presidency.

Funes was convicted in absentia in November 2017, along with his son Diego, of illegal enrichment after failing to account for $206,665 of his assets. The former president, who sought asylum in Nicaragua in 2016 after claiming he was being politically persecuted, was ordered to pay nearly $420,000 in restitution to the government.

Saca’s predecessor was also accused of corruption, but died before the matter was resolved. Francisco Flores was accused of diverting $15 million in aid money from Taiwan after two earthquakes devastated the small Central American nation in 2001.