The husband of a whistleblower who provided evidence of alleged corruption to slain Maltese journalist Daphne Caruana Galizia was released on Tuesday, one day after police arrested him following a request from Cyprus' authorities. 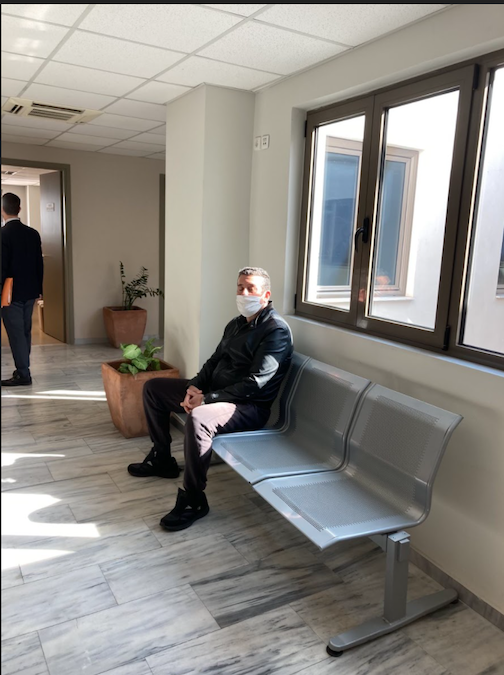 Pantelis Varnava in a Greek court on Tuesday. (Photo obtained by OCCRP)Pantelis Varnava, the husband of Maria Efimova and a citizen of both Greece and Cyprus, is facing extradition from Greece on charges of fraud, embezzlement, forgery and money laundering, according to a document he shared with OCCRP. He denies any wrongdoing, and his lawyer says that the charges are a continuation of a string of accusations previously made against his wife.

Efimova, a former employee at the Malta-based Pilatus Bank, is known for having blown the whistle to Daphne Caruana Galizia, exposing a money trail facilitated by her bank between Azerbaijani President Ilham Aliyev, and Michelle Muscat, the wife of Maltese ex-prime minister Joseph Muscat, to whom he had allegedly been sending payments to.

A subsequent investigation in Malta failed to back Efimova’s claims and she was ultimately charged with perjury.

Efimova, along with her husband, first faced arrest warrants from Cypriot authorities in January of 2018 after they alleged that she had stolen funds from I.F.D. Fragrance Distribution Co. Limited, a Cypriot firm where she had previously worked.

Months later, Efimova was also issued an arrest warrant by Maltese authorities for allegedly embezzling several thousand euros from Pilatus bank and defaming public officials. She subsequently turned herself in at a police station in Greece, where she fled back in 2017.

The Greek courts ultimately rejected Malta’s extradition request over what they said were insignificant offenses.

In a Facebook post, Efimova said that the most recent arrest of her husband was made under the “same ridiculous charges” that were filed against her three years ago, and that they were being made by corrupt actors in Malta and Cyprus, who she said had joined forces yet again.

Her husband responded to the charges as well, telling OCCRP that he had never worked at the company he was being accused of stealing from, and that he has also “had nothing to do with its director.”

His lawyer, Dionysis Verras, called the accusations against his client “fabricated” and “rigged,” saying that it served as a “continuation in a chain of European warrants which started a few years ago with his wife.”

“I realized that there was something wrong with the case of this person [Varnava]. There’s something much more serious, and they are trying to implicate him because of another more serious matter which apparently has a procedural, vindictive character,” Verras said.

“I believe it is the last time that this family should be tested and I believe that with what is going to happen here, their adventure will come to an end,” he said, adding that he and his client “have documents showing that a dirty game is being played on him.”

The Court of Appeals of East Crete will decide Varnava’s fate, which, according to Verras, is expected to convene in the coming days.

Varnava, who has resided in Crete since 2017 with his wife and their two children, was released with restrictive terms barring him from leaving the country, and is obligated to check in regularly with the police, his lawyer said.

The couple was exposed to a smear campaign in 2018, when some Cypriot media outlets falsely reported that Efimova was a suspect in the murder of Caruana Galizia who died in a car bomb attack. Such allegations prompted a group of European Parliament members to denounce the Cypriot media.