Moldovan President Igor Dodon, who is seeking a second presidential term, is apparently relying on support from the Kremlin and Russian intelligence, according to OCCRP partner RISE Moldova. 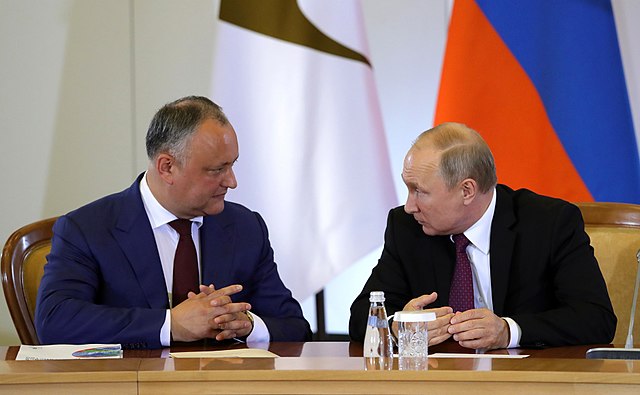 According to the team, Kremlinovici is the username Dodon employed to communicate with Moldovan politicians. RISE has previously reported extensively about the president’s alleged shady businesses.

In the investigative report released last week, the reporters noted, “The communication took place via an encrypted application that runs on a BlackBerry smartphone the Socialist party leader had used until mid-2017.”

RISE Moldova said that the smartphone was delivered to its reporters by an anonymous intermediary. “A note [attached] to the device recommended journalists to study the smartphone’s content [for] a few days and extract the information of interest. We later returned the device via the intermediary,” RISE said.

After extracting the contents, RISE also analyzed the data from the Chernov Archives, a “leak from the so-called Moldova affairs division in the administration of President Vladimir Putin,” obtained by Dossier Center.

The RISE journalists said the motives of those providing the phone were unclear, while noting that interesting data was discovered.

“In the process of documenting #Kremlinovici, we have learned that an office with Russian ‘consultants’ exists in the very heart of Chisinau [the Moldovan capital], in the neighborhood close to the Moldovan presidential administration,” RISE said.

The agency added that Moldova’s “Socialist Party lawmakers and a former aide to Prime Minister, Ion Chicu, are frequent visitors to that office.”

RISE added that, “We’ve also learned that some Moldovan politicians have been engaged in collaborative activities with the Kremlin’s consultants for years and that Igor Dodon even has Moscow review speeches he prepares for international events.”

The investigative reporters further learned that an office within the Russian presidential administration deals with Moldova’s affairs. According to the Dossier Center, the office is run by Igor Maslov, a colonel in the Russian Foreign Intelligence Service (SVR).

RISE said that Maslov’s subordinates allegedly “are busy writing briefings about Moldovan politicians and activists, enabling the Kremlin to store updated bios and sensitive information about most politicians and high ranking officials in Chisinau, including the chiefs of Moldovan defense and security forces.”

Maslov, according to the journalistic investigation, submits his reports to Vladimir Chernov, head of the Department for Inter-Regional and Cultural Affairs with Foreigners, an institution reporting in turn to President Vladimir Putin.

Some of the data from the president’s old smartphone indicated that some of Dodon's visits to Moscow in 2015 resulted in concrete deals.

At that time, Dodon met with Gazprom Media, a daughter company of the Russian gas giant that controls the NTV station. Just a week prior to that meeting, according to RISE, Gazprom Media awarded the license for re-broadcasting its programming in Moldova to Exclusiv Media SRL, where Galina Dodon, the president’s wife, had been working since 2012.

Exclusiv Media SRL is owned by Moldovan Socialist lawmaker Corneliu Furculiță, who was mentioned in another RISE investigation on a “scheme exposing Socialist Party officials involved in secret transactions with an offshore company tracking to Russia.”

RISE Moldova said it gathered information for the #Kremlinovici project from two sources and that two other independent sources verified the findings.