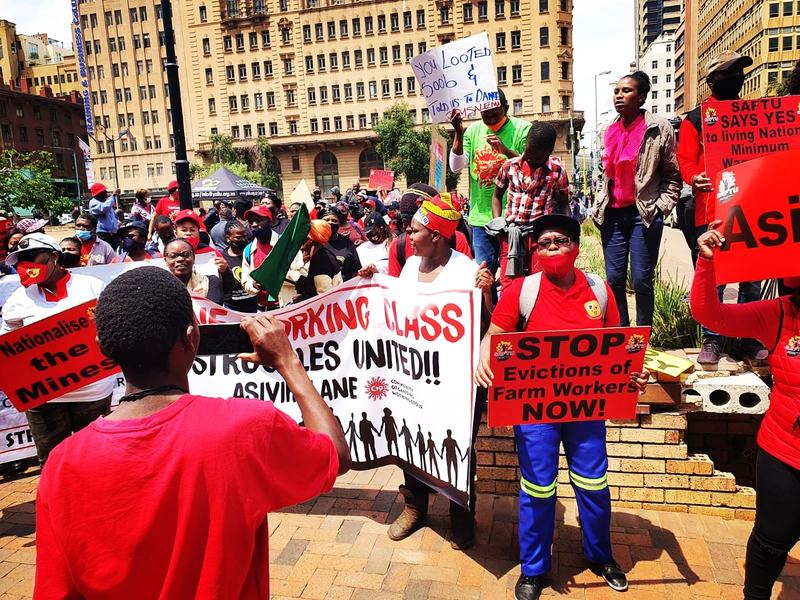 Corruption, high unemployment rate brought South African workers to streets. (Photo: SAFTU)Calling on workers throughout the country not to go to work on Thursday, the Congress of South African Trade Unions, COSATU, stressed that “the workers need to unite in defending jobs and fighting corruption.”

COSATU also reminded of the shortcomings of law enforcement agencies in fighting corruption and gender-based violence.

“We are making a louder call for decisive state intervention in strategic sectors of the economy, the use of a variety of macroeconomic and other levers at the states’ disposal to deliberately drive industrialization, sustainable development, decent employment creation, and break historical patterns of colonial exploitation and dependence,” read the statement.

Corruption has emerged as one of the biggest threats to South African democracy and is “like cancer eating at the moral fibre of our society and eroding the moral standing of our revolution and the cause for which our people laid down their lives,” COSATU said in a proclamation.

The Congress cited the government’s 2017 figures stating that “corruption costs the country’s Gross Domestic Product, GDP, at least 27 billion rand (US$1.63 billion) annually” but that the COVID-19 outbreak only added to the massive corruption storm triggered by the demand for personal protective equipment.

“Even before COVID-19, we faced an economic pandemic of soaring unemployment, grinding poverty and extreme inequality,” the South African Federation of Trade Unions, SAFTU, said, adding that the pandemic destroyed 2.2 million jobs, and more than five million workers more were reduced to utter hopelessness.

The Federation also blamed capitalism itself, saying that “poverty and hunger are widespread,” and that “capitalism fails the working class and the poor, not by default, but by design.”

Capitalism flourishes “when there is a reserve army of unemployed labor, when there is discord and disunity amongst the working class and the poor, and the state takes capital’s side to increase exploitation and undermine civil liberties,” SAFTU said.