A New York antiquities dealer who was arrested last month along with his business partner for falsifying provenance records has a family history in the illegal antiquities trade that goes back half a century, the Association for Research into Crimes Against Art, ARCA, revealed. 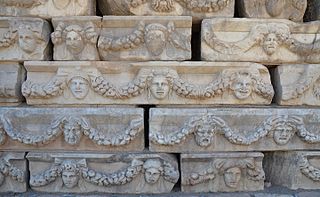 In cases like the looting of Aphrodisias, stolen cultural heritage can directly translate into lost tourism dollars from the local economy. (Photo: Carole Raddato, Flickr, License)Erdal Dere and Faisal Khan ran Fortuna Fine Arts Ltd. on Manhattan's Upper East Side Neighborhood and are suspected of having forged documents to support their claims that the artifacts they sold previously belonged to collectors who had died.

However, there were no shortage of warning signs that something suspicious was happening at Fortuna Fine Arts.

Erdal Dere is the son of Selim Dere, who in 1973 was arrested by Turkish police along with his cousin Aziz Dere after looted fragments of a 2000-year-old Greek sarcophagus featuring the 12 labors of Herakles was discovered in Aziz’s Istanbul gold shop, the outlet reported.

After serving their sentences for antiquities smuggling, the two relocated to North America. Aziz moved to Canada and Selim to New York where he initially founded a jewelry store that would ultimately become Fortuna Fine Arts Ltd, the same store where Erdal Dere and Khan were arrested for running their false provenance scheme.

Despite running afoul of the law in Turkey, Selim Dere quickly found his way back into the antiquities trade. In 1984, the Museum of Fine Arts in Boston purchased the Statuette of Men, the Moon God, a first century Roman artifact from Dere’s jewelry shop, at the time called West Side Jewelry.

The Boston Museum’s provenance record for the item, only states that it was purchased from Selim, without specifying its history between the first century and arriving in Dere’s Jewelry shop.

Then in 1989, three frieze blocks - an architectural feature which was often stylized in the ancient world - were stolen from an excavation uncovering the Greco-Roman city of Aphrodisias in Turkey's Aydin province.

By chance, four years later, a NYU archaeology professor noticed the block in the window of Dere’s Manhattan shop, now known as Fortuna Fine Arts Ltd. He notified the Turkish authorities who informed the FBI which confiscated the block and repatriated it to Turkey. It remains on display at the Aphrodisias museum in Aydin province.

In cases like the looting of Aphrodisias, stolen cultural heritage isn’t just about national pride but can also directly translate into lost tourism dollars from the local economy.

However, no charges were filed against Selim Dere at the time and he continued to be a notable figure in the art world, working with museums at Cornell, Harvard and Princeton as well as New York’s Metropolitan Museum of Art.

By the mid 2000s, his son Erdal had taken the helm of Fortuna Fine Arts, continuing the outfit’s suspect dealings.

In 2009, although having checked nothing to declare on his customs sheet on his flight back from Germany, in Erdal’s luggage, officers at New York’s JFK airport discovered a Byzantine pendant as well as a type of seal known as an intaglio stone and terracotta fragments which were both found to be looted from archaeological sites in Italy.

By 2018, after seizing an Etruscan Aryballos, a type of vase, from the shop, the FBI seemed to have caught on that suspicious activities were happening at Fortuna Fine Arts Ltd. and began the investigation which culminated with Dere and Khan’s arrests at the end of September.

A multi-billion dollar criminal industry, according to Standards Chartered Bank, the Illegal antiquities trade isn’t just a high stakes hobby for high-society socialites. It’s a global black market which has ramifications on other illegal activities engaged in by both the buyers and sellers.

“[The illegal antiquities trade] not only robs us of our past and cultural heritage, but recent cases have evidenced that looting and trafficking of art and antiquities funds criminal activities and creates conflict and extremism around the world, producing long-lasting economic damage,” said a 2018 report on the industry by Standards Chartered Bank.

In the countries where artifacts are looted, their illegal trade is often a significant funding source for both organized crime and militant groups.

“You cannot look at it separately from combating trafficking in drugs and weapons. We know that the same groups are engaged, because it generates big money,” said Catherine de Bolle, Executive Director of Europol after a major crackdown on the trade back in May.

The looting of cultural property from active war zones is considered a war crime under a 1954 convention.

On the other end of the deal, the false provenance records don’t just help wealthy dealers get the illicit artifacts off their hands, but can also be used for money laundering purposes, boosting the value of an item that can then be used to underwrite illicit gains or be donated for a bloated tax write off.

“Organized crime has many faces. The trafficking of cultural goods is one of them and it is not a glamorous business run by flamboyant gentlemen forgers, but by international criminal networks,” de Bolle said.