The U.S. is seeking to recover more than US$300 million in assets it says are linked to the multi-billion dollar scandal surrounding a Malaysian development fund. 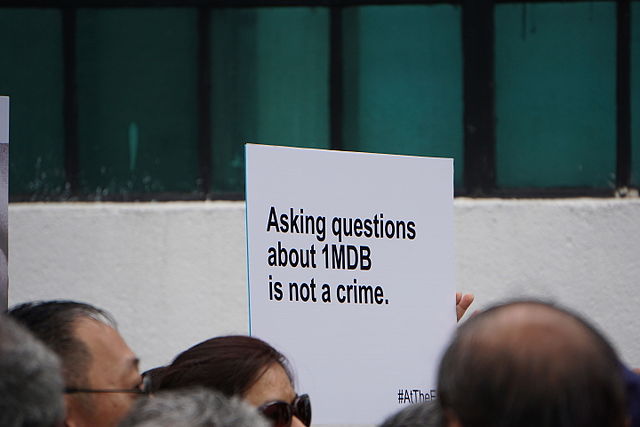 Since 2015 1Malaysia Development Berhad (1MDB) has been under heavy scrutiny for suspicious money transactions as well as evidence of money laundering, fraud, and theft. (Photo: Khairil Yusof (CC BY-SA 4.0))U.S. Justice Department said on Wednesday it had traced the assets to an escrow account in the United Kingdom holding more than $300 million that are traceable to a line of credit extended by Petroleos de Venezuela S.A. (PDVSA) to PetroSaudi Oil Services (PetroSaudi) for the use of two drill ships that PetroSaudi acquired with funds fraudulently obtained from 1MDB.

It’s not the first sum the U.S. has recovered from the more than $4.5 billion believed to have been misappropriated from 1Malaysia Development Berhad (1MDB) by Malaysian officials, including former Prime Minister Najib Razak, but also executives at U.S. bank Goldman Sachs.

For his role in the candal, Najib was sentenced to 12 years in Kuala Lumpur but is appealing.

The U.S. has sought the forfeiture of more than $2.1 billion in assets linked to the 1MDB money laundering and bribery scheme and has so far recovered or has assisted Malaysia in recovering nearly $1.1 billion.

“These actions represent collectively the largest action brought under the department’s Kleptocracy Asset Recovery Initiative as well as the largest civil forfeiture action ever instituted in the Justice Department’s history,” the DOJ statement said.

Riza Aziz is a Hollywood producer and Najib's stepson who was accused in Malaysia of money laundering related to the scandal but prosecutors dropped the charges in May after Aziz agreed to help authorities recover 1MBD-related assets.

The Malaysian Anti-Corruption Commission (MACC) said that in July, the Kuala Lumpur High Court allowed its application for an interim order to “prohibit dealing with overseas property involving an estimated amount of more than $340 million, kept in an escrow account of an international law firm, Clyde & Co. LLP in London.”

MACC said that it believes the money was related to a “fraud conspiracy which involved the former Prime Minister, Datuk Seri Najib Razak; Chief Executive Officer (CEO) of PetroSaudi, Tarek Obaid; businessman, Low Taek Jho or Jho Low as well as individuals related to 1MDB and its subsidiaries.”

However, 1MDB “veered into lavish spending, producing films such as “The Wolf of Wall Street” and buying casinos, champagne and “Dustheads,” -- a painting by U.S. artist Jean-Michel Basquiat,” Businessinsider reported.

The Justice Department, as the Wall Street Journal reported last year, was allegedly probing “a $100,000 donation to President Trump’s Victory PAC (political action committee) in 2017, which may have come from funds linked to disgraced Malaysian financier Jho Low,” who was accused of being the operator and key intermediary for 1MDB but reached a settlement with the U.S.