Russia’s foremost opposition figure has posted a jocular message online boasting of his gathering recovery after he was poisoned with a state-developed nerve agent last month. 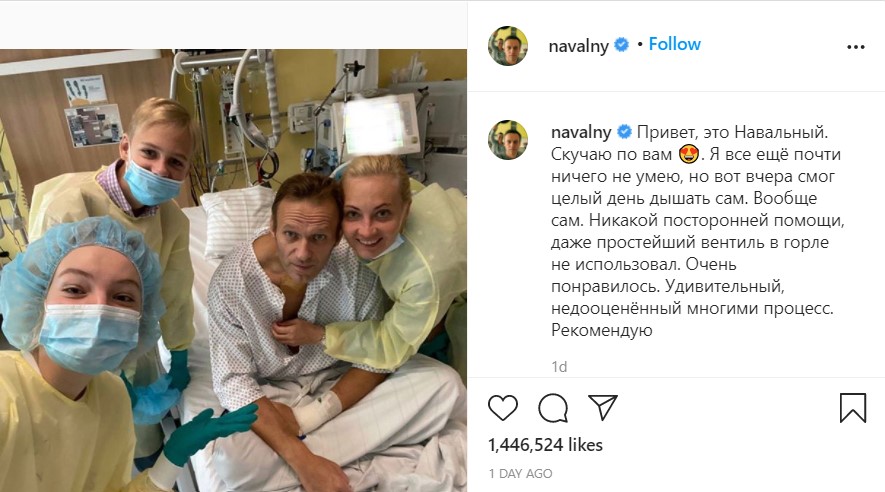 Medical experts in Germany have confirmed that Navalny was poisoned with Novichok, a nerve agent developed by the Russian state (Photo: Alexey Navalny)Alexei Navalny, leader of opposition party Russia of the Future and internationally regarded as the Kremlin’s pre-eminent critic, on Tuesday posted a message on Instagram saying he is now able to breathe on his own since waking from a medically-induced coma.

“I didn’t need any outside help, not even a simple valve for my throat,” his post said, accompanied by a photo of himself sitting hunched on a hospital bed surrounded by his wife and children.

“I enjoyed it very much. An amazing, underestimated feeling. I recommend it,” he added.

News of the politician-come-investigative-journalist’s recovery follows his transfer to a hospital in Germany after he fell ill on a commercial flight from Siberia to Moscow. His wife, Yulia Navalny, has claimed he consumed only a cup of tea before boarding.

German Chancellor Angela Merkel has since described evidence from medical experts that Navalny was poisoned with Novichok - a nerve agent developed by the Russian state during the Soviet era - as “unequivocal.”

A spokesperson for the opposition leader has since confirmed that Navalny intends to return to Russia just as soon as his condition will allow it.

“All morning journalists have written to me and asked if it is true that Alexey plans to return to Russia. I understand the reason for the question, but nevertheless find it strange that anyone could think otherwise,” Kira Yarmysh said via Twitter.

“Once again I confirm to everyone: no other options have ever been considered,” she added.

The alleged attack has caused international outcry, drawing an atypically hard-line response from U.K. Prime Minister Boris Johnson as well as representatives of the office of U.S. President Donald Trump.

Johnson described the incident as “outrageous,” while the White House said that the possible attack was “completely reprehensible.”

International pressure has swiftly mounted for Russia to provide an account of how exactly Navalny fell ill.

Shortly after the opposition leader woke from his coma last week, German foreign minister Heiko Maas said that unless the Kremlin adequately explains what happened, the E.U. member state would begin discussions with its allies on further sanctions against Russia.

Maas declined to rule out the possibility that such action would target the Nord Stream 2 pipeline. Still in its planning phase, the project is set to provide much of the European market with Russian natural gas - a prospect much condemned by the United States.

Germany’s hard-line stance over the incident appeared to be contravened on Tuesday by a statement from Austrian president Alexander Van der Bellen, who said that the fellow E.U. member state would not support sanctions related to the project, as reported by Radio Free Europe.

Representatives of the Kremlin claim they have submitted requests to the relevant authorities in Germany for information regarding his condition such that a formal investigation may be conducted.

Maria Zakharova, a spokesperson for the Russian Ministry of Foreign Affairs, said that as of last week no response has been received, accusing Germany of double standards in its approach to what is, by any account, an incident of gathering international concern.