A Mexican journalist who reported on crime was found on Wednesday decapitated near the railroad in the town of Motzorongo, in the eastern state of Veracruz. 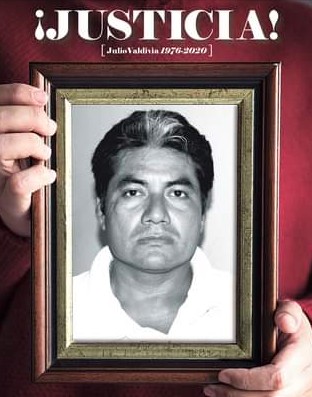 Colleagues of decapitated Mexican journalist Julio Valdivia demand justice! (Photo: Diario El Mundo, Facebook)Julio Valdivia’s colleagues described him as a reporter who loved his job and worked even when he was off. Local police found his body around 2.30 p.m. He was first beheaded, then brought to the site and arranged like he was hit by a train, local newspaper Diario El Mundo, that Valdivia worked for, reported.

The Veracruz State Attorney, Verónica Hernández Giadáns, has ordered an investigation into what she said was murder.

The state’s security bodies also “reaffirmed their commitment to ensure the safety of all Veracruz residents and condemned the murder of journalist Julio Valdivia.”

Valdivia’s murder triggered peaceful protests in Cordoba, where dozens gahtered to call on authorities to stop the murders of journalists and demand “Justice for Julio!”

The Committee to Protect Journalists (CPJ) also called on Mexican authorities to “immediately undertake a thorough and credible investigation into the killing of journalist Julio Valdivia and bring the perpetrators to justice.”

“The shockingly brutal killing of Julio Valdivia only strengthens Veracruz’s status as not just the most violent state for journalists in Mexico, but as the deadliest region for journalists in all of the Americas,” CPJ’s Mexico representative, Jan-Albert Hootsen, said.

He added that federal and state authorities “cannot stand idly by and continue to allow Veracruz’s vicious cycle of impunity and violence against the press.”

Although it remains unclear which case Valdivia was working on, his colleagues said that he had recently received threats, but did not reveal details about them, according to CPJ.

However, just a day before he was beheaded, Valdivia’s newspaper posted on its Facebook page a video credited to Valdivia and related to a shootout in Cosolapa, a town near Tezonapa in Veracruz’s neighboring state of Oaxaca.

Valdivia’s colleagues also told CPJ that the “border region between Veracruz and Oaxaca is a very complicated place to report on,” as there are gangs “involved in drug trafficking and oil theft.”

They said that “a lot of people have been killed there recently.”

CPJ reminded that “Mexico is the most dangerous country for journalists in the Western Hemisphere,” and that at least three journalists have been murdered in the country in 2020 in direct relation to their work.