Protests have erupted throughout Bulgaria over the last week after a political leader of an opposition party attempted to access a public beach and was stopped by national authorities who were protecting a nearby mansion of a retired politician. 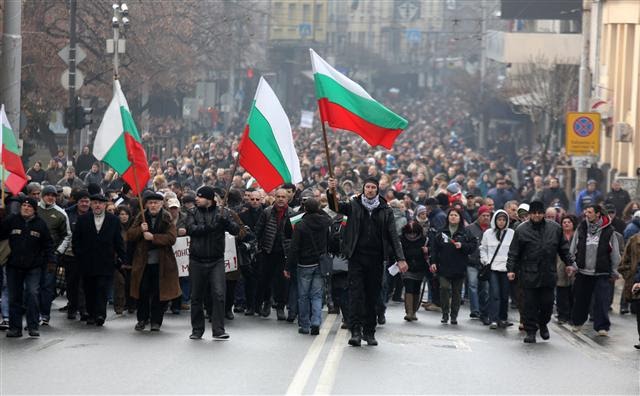 2013 Protests in Sofia, Bulgaria, which were in response to many of the same issues of state-sponsored corruption that have provoked the ones that have spread throughout the country over the past week. (Photo Credit:Photos)The incident appeared to have escalated pre existing tensions in a country that has long been perceived as one of the most corrupt in Europe. Its political system has been described as a form of state capture, where senior government officials serve as and profit from the country’s criminal elite.

Dimitar Bechev, a senior fellow at the Atlantic Council and a Bulgarian professor of European Studies and International Relations, told OCCRP that when Hristo Ivanov, a political leader in the opposition party “was prevented by guards of the National Protection Service assigned to a retired politician with nefarious business links - laid bare the phenomenon of a captured state and helped detonate mounting tensions.”

Protesters took to the streets objecting to the fact that officers of the National Protection Service (NSO), at the expense of Bulgarian taxpayers, had been hired to protect the mansion of Ahmed Dogan – a former politician who no longer serves in public office – and keep the public away from the public beach.

Dogan, who was acquitted in a high-profile corruption trial in 2010, is said to be a close ally of media baron Delyan Peevski, who also serves as member of Bulgaria’s parliament.

According to Bivol, OCCRP’s Bulgarian member center, Peevski has amassed an US$800 million offshore empire, and critics have argued that his rapid ascent through politics – he became a deputy minister at the age of 25 – indicates that he is Dogan’s frontman and proxy.

Prime Minister Boyko Borisov, after initially defending NSO protection for both Dogan and Peevski, said on Saturday that guards would no longer be used to protect either of them.

As protests across the country persist, the public outrage regarding state-funded security service appears to be just the tip of the iceberg.

“Tensions have been brewing over the past few months since Ivan Geshev, a controversial figure, became the Prosecutor General,” Bechev said.

Geshev, who became Bulgaria’s prosecutor general in November of 2019, saw his career take off after he made a series of public statements exonerating Peevski for his alleged role in stripping the assets of the now defunct Corpbank.

“The fourth largest lender was something of a slush fund for successive governments,” Bechev explained.

After the fiasco ultimately wiped out five percent of Bulgaria’s economy, “taxpayers filled in the gap as Peevski stripped the bank's juicier assets,” Bechev said, explaining that prosecutors failed to go after anyone of note involved in the scandal.

Geshev, the prosecutor general is under fire after ordering the raids of President Rumen Radev, who has become increasingly critical of what he describes as a corrupt parliament that merely serves the country’s oligarchic interests.

In a speech in front of protesters, Radev called for a "purge" of the "mafia" within the government and the prosecutor's office.

The current protests, the largest since those that took place throughout 2013 and 2014, are a response to many of the same issues Bechev explained. This time, however, Prime Minister Borisov, who was loosely aligned with protesters seven years ago, also faces pressure to resign.

Photos of the Prime Minister have recently been circulating throughout Bulgarian media showing him asleep next to a cabinet which were revealed to have wads of 500 euro bills and gold inside of it, along with a gun sitting on top.

After he claimed that the image had been doctored, or that the incriminating items pictured had been staged in a set up by his political opponents, Bivol reported that there is no evidence that the pictures themselves had been altered.

Borisov, who is also being investigated on money laundering charges by Spanish authorities, said in a Facebook video on Saturday that he would not be stepping down.

“Borisov will step down only if he calculates he will be better off with early elections,” Bechev explained, saying that the other likely scenario is that he will “limp on” until March 2021, when a vote is scheduled to take place.