When packages of cocaine started washing up on the beaches of the Black Sea last year, it made headlines around the world. Romanian police swiftly scrambled hundreds of officers in what they said was an unprecedented search for the seaborne drugs. 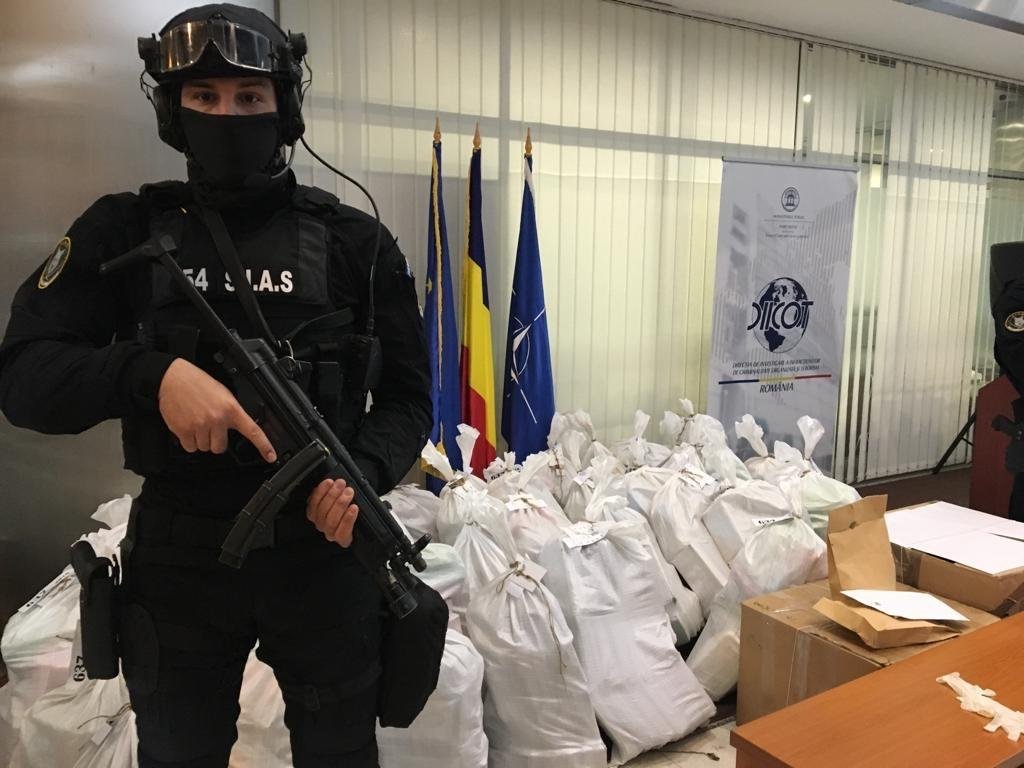 Romanian police present the drugs they recovered from the Danube delta and the shores of the Black Sea to the public on 26 March, 2019. (Credit: MEDIAFAX FOTO)After scouring the coastline, police collected a total of 1.8 tons of the white powder worth an estimated 600 million euros (US$685 million).

On Wednesday, Bucharest prosecutors said they had brought charges against 14 people they believe are behind the huge haul. They include Joseph Nour Eddine Nasrallah, one of Brazil’s most prolific drug lords, who has been charged in absentia with drug trafficking and being part of an organized crime group.

“In operation ... ‘GRIMM BROTHERS,’ an organized crime group was investigated for transporting drugs by sea to Romania, namely to the Black Sea-Delta of [the] Danube” river,” according to the press release.

“The final destination of the drugs was the Western Balkans, but also Western Europe, Holland, Belgium and Spain,” prosecutors said.

Nasrallah, nicknamed “the Sheik,” has a long criminal history. Last year he was jailed and sentenced to 22 years in his adopted country of Brazil — the latest in a series of arrests, convictions, and releases for narcotics offenses that stretch back to 2007. In Lebanon, where he was born, he has been handed five life sentences for drug trafficking, according to the court documents.

Romanian prosecutors said the drug lord had told associates he wanted to sell a major shipment of cocaine to Europe in December 2018. He already had 3 tons of the drug from Brazil and Colombia stashed in a warehouse — now he just needed a buyer.

Prosecutors alleged that by January, Nasrallah had found buyers for his cocaine: the “Balkan Cartel from Serbia.” Early the next month, his gang moved the drugs from the warehouse near the Brazilian port of Belem, loaded them into small boats, and delivered them to the RB Eden cargo ship.

The ship soon left Brazil for Turkey, where it arrived on March 1. What happened next is unclear, but Romanian prosecutors think around 300 kilograms of the cocaine ended up in the hands of a Turkish organized crime group. The rest was allegedly loaded onto another ship, the Sormovsky 121, which crossed the Black Sea into Romainian waters.

The cocaine was already divided into kilogram sacks branded with various logos, including a Fleur de Lis, “CARTIER,” “4G,” “Louis Vuitton” and Albania’s national emblem. Prosecutors allege the packages were stuffed into bags, which were bound together with life vests — some bearing the Brazilian flag — and left to float not far from Romania’s coast around midday on March 17.

They were picked up, according to the court documents, by a team of criminal contractors hired by the “Balkan Cartel.” Led by Leon Palacios Ruben Pedro — who has since been imprisoned in Spain for fraud, forgery and driving crimes — the group of Spaniards, Romanians and Ukrainians were allegedly known in the underworld for their skills at retrieving drugs from the sea.

Romanian prosecutors said the group of professional divers were so “specialized in this field” that they “were used frequently by Spanish organized crime groups for this type of operation in Spanish waters."

Around 4 p.m. on March 18, more than 24 hours after the drugs had been left floating, the Danube border patrol logged two boats making their way through the vast marshy delta where the river meets the salty waters of the Black Sea.

Investigators believe the recovery team found the cocaine and started to load the packages into  speed boats, but the huge haul proved to be too heavy. One of the vessels capsized near Sfăntu Gheorghe beach, sending at least 1.8 tons of cocaine spilling into the water.

Chastened but alive, the team grabbed what they could and returned to shore. There, they loaded some 30 bags of cocaine into a van and drove it to a parking lot in a small village in the delta to be picked up by two drivers who worked for Serbian gangster Stojic Predrag, who the court documents say was working with the Balkan Cartel.

On the evening of March 21, the Serbian drivers arrived to move the drugs. But after finding only 30 bags, they began arguing and drove off leaving the stash in the van with the keys on its front wheel. Unknown to them they had been seen by a security guard, who found the cocaine after they left. He called the police, but the Serbians returned and took the drugs before they arrived.

Police caught one of the drivers two days later, but his truck was empty. The other one was stopped as he tried to cross the border to Serbia. Investigators believe he had been transporting the drugs, but left them in south Romania after hearing his colleague had been apprehended.

Both drivers are currently on trial in Romania for drug trafficking and being members of an organized crime group.

Most of the extraction team left around the same time. Team leader Ruben and his girlfriend were stopped by traffic police for towing a boat without a license, but managed to bribe their way out of trouble by paying 2,000 euros. They then abandoned the boat, which was later found to have 3 kilograms of cocaine stashed inside, and left the country.

The two policemen who allegedly accepted the bribe were among a total of 16 people charged by prosecutors on Wednesday.