Long-time rivals Benjamin Netanyahu and Benny Gantz signed on Monday a power-sharing deal that allows them to form a new emergency government, ending Israel’s year-long political deadlock but also giving Netanyahu, indicted in three corruption cases, the right to veto the appointment of a new state prosecutor and attorney general. 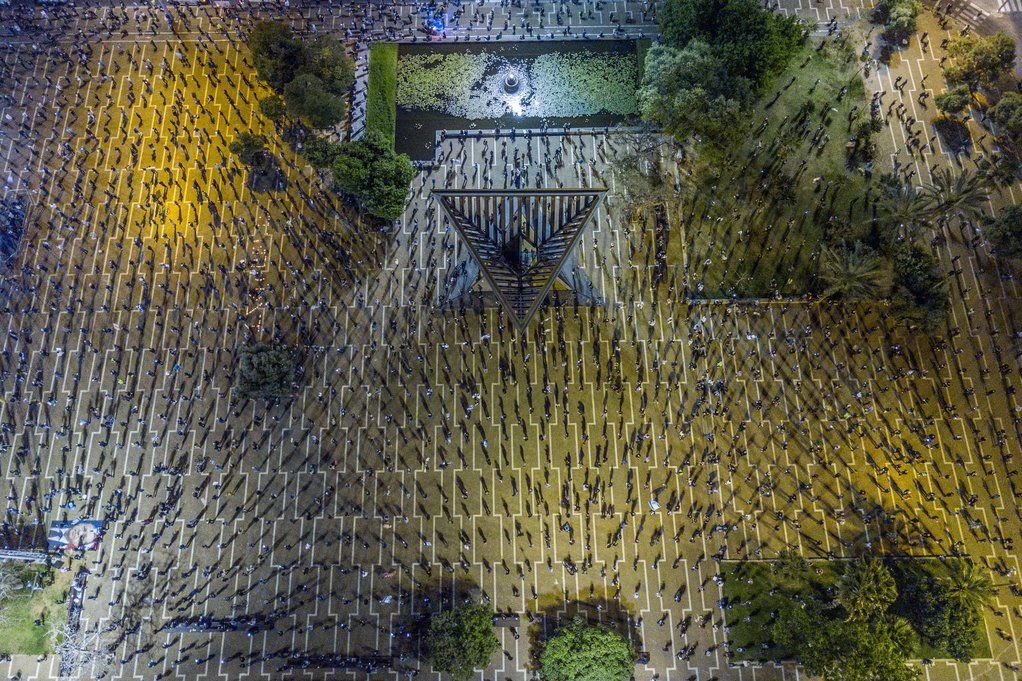 Protests at Tel Aviv's Rabin Square against new Netanyahu - Gantz coalition Israeli Government. (Photo: Tomer Appelbaum, Twitter)Ignoring protests a day before, the two agreed after three stalemate elections to form a government and rotate the premiership every 18 months, according to Haaretz.

Thousands protested against the deal on Sunday while respecting the country’s restrictions imposed due to the COVID-19 pandemic.

Wearing face protection masks and keeping a two meter distance from each other, protesters gathered in Tel Aviv and accused the two of “destroying Israeli democracy,” the Times of Israel reported.

They called on Gantz’s Blue and White party not to form a coalition with a prime minister charged with corruption, according to Reuters.

Still, on Monday the deal was sealed and opponents say that Gantz, who had advocated a “clean government,” had now become part of the problem.

“They are fighting to get into the government, telling themselves stories,” the Times of Israel cited Yair Lapid, one of the leaders of Yesh Atid, a party that has split with Gantz’s Blue and White party over their cooperation with Netanyahu.

He also warned that the new coalition government is not “an emergency or a national unity government,” claiming that Netanyahu and Gantz did not talk about coronavirus or the economy, but “about themselves and their jobs.”

Lapid, whose party was in coalition with Blue and White accused Gantz of breaking it up and opting instead to “sit under a man indicted for fraud.”

Netanyahu’s trial is set to start on May 24.

Israel’s Attorney General Avichai Mandelblit charged Netanyahu in November with bribery, fraud and breach of trust, based on police allegations that he granted state favors worth hundreds of US$ millions to an Israeli media businessmen in return for gifts and favorable coverage.

However, the coronavirus pandemic, with more than 13,000 infected and 173 deceased in Israel, has given Netanyahu an unexpected boon, delaying his corruption trial by two months, as OCCRP reported in March.