Family members of top government officials are involved in South Sudan’s corrupt gold mining sector which is booming and threatening the fragile peace that ended the five-year-long civil war, warned a new report by The Sentry. 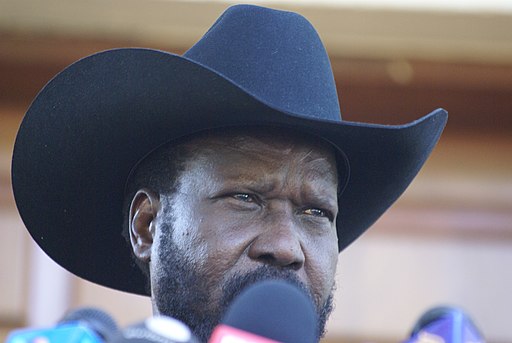 The President of South Sudan wearing his recognizable cowboy hat. (Photo: Al Jazeera, Flickr, CC BY-SA 2.0)The NGO was co-founded by actor George Clooney with the mission to investigate money related to African war criminals. It found links between 32 mining companies and members of Salva Kiir’s inner circle, such as his daughter, the son of former vice-president James Wani Igga or the deputy defense minister. The military also allegedly has strong mining interests.

“The president’s core network has used its control of the minerals sector to consolidate its grip on South Sudan’s state revenues and natural resources,” John Prendergast, the other co-founder of The Sentry, said in a statement.

Most gold mining licences were awarded under opaque circumstances, the report claims.

In 2012, then one-year old South Sudan implemented a Mining Act designed to “formalize” the artisanal gold mining sector, “requiring that all prospective companies and artisanal miners apply for licenses.”

The NGO identified cases where those licenses were awarded very quickly, within days, and to people with very little knowledge in mining, questioning whether the applicants were ever properly evaluated.

The Sentry discovered that the company with the highest number of licenses is reportedly owned by Ashraf Seed Ahmed Hussein Ali, known as Al-Cardinal, a controversial oligarch now under sanctions.

Two other licenses were awarded in 2016 to a Chinese company in which Salva Kiir’s daughter Winnie, who was 20 at the time, was a shareholder. Those licenses covered territories in active conflict zones.

President Salva Kiir signed a power-sharing agreement in 2018 with his rival, opposition leader Riek Machar, who became vice president. The agreement ended a civil war that took at least 400,000 lives and displaced millions. Many areas of the country are just starting to recover.

Then, a burgeoning industry in South Sudan, gold mining started to spark violence, especially in regions where peace is still fragile. Criminal networks and still active paramilitary troops have been targeting natural resources, including legitimate mining sites, The Sentry said. To protect their mines, companies recruited the military or local guards.

The NGO fears that history will repeat itself, as competition over the country’s oil wealth contributed to the start of the civil war.

Despite having approximately three billion barrels in oil reserves, the price of fuel in the country makes it inaccessible to most people in the country. Two liters of fuel cost more than the monthly salary most citizens earn, according to a Vice report from last month - a situation for which the outlet blames corruption.

South Sudan mining resources could fuel the economic development much needed in this war-crippled country but without accountability, it might instead fuel corruption and inflame conflict, the reports warned.