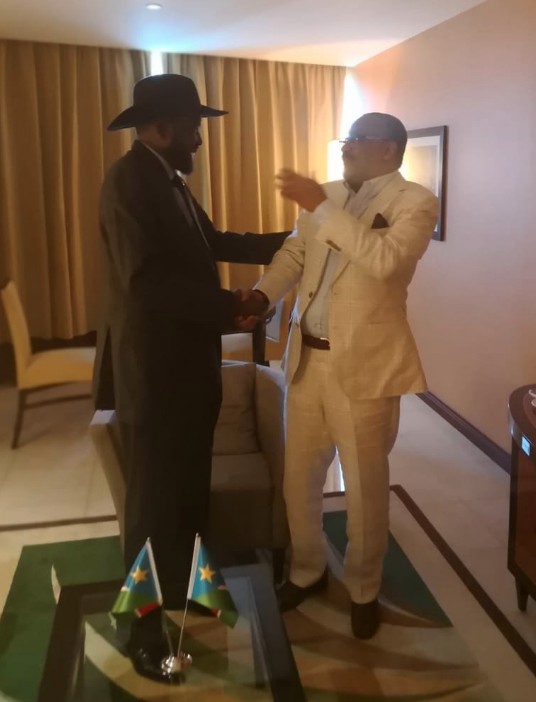 South Sudan's President Kiir (L) with Al Cardinal (R) (Photo: Twitter)Al-Cardinal, according to the report published on Monday, “has mastered the art of doing business in a state riddled with corruption.”

Since 2006, he has “exploited opaque procurement processes, weak oversight institutions and cozy relationships with the country’s most powerful politicians to line his own pockets.”

The businessman has also been involved in major procurement scandals, private businesses with ruthless military generals, imports of military equipment during a bloody civil war and he even scored lucrative contracts linked to the implementation of the peace deal.

“Al-Cardinal has built a corporate empire on the back of predatory business dealings in South Sudan. He now has business operations from Ethiopia to the United States and owns expensive real estate in places like London and Dubai,” said George Clooney, Co-Founder of The Sentry, commenting on the report.

Clooney called for action against the oligarch, reminding that “governments around the world have the tools to take action and impose meaningful consequences.”

The report further reveals the procurement fraud by the “Sudanese Oligarch,” as he received “hundreds of millions of US dollars in suspect contracts,” from an inflated Toyota contract in 2006 to a tractor deal in 2015.

Al-Cardinal was also involved in the import of military equipment from Russia, at the height of the civil war in South Sudan in 2014, when military deployed the imported armoured vehicles against civilians in Upper Nile and Unity states.

In 2017, according to The Sentry’s report, the government of South Sudan “committed to pay Al-Cardinal more than three million barrels in crude oil for the company’s provision of undisclosed goods and services,” while a year later it agreed to pay the Al-Cardinal company U$299 million for “similarly ambiguous services.”