A United States Federal court charged Venezuelan leader Nicolas Maduro on Thursday with drug trafficking, narco-terrorism and firearms possesion, claiming he and 14 current or former Venezuelan officials had floodded the U.S. with cocaine. 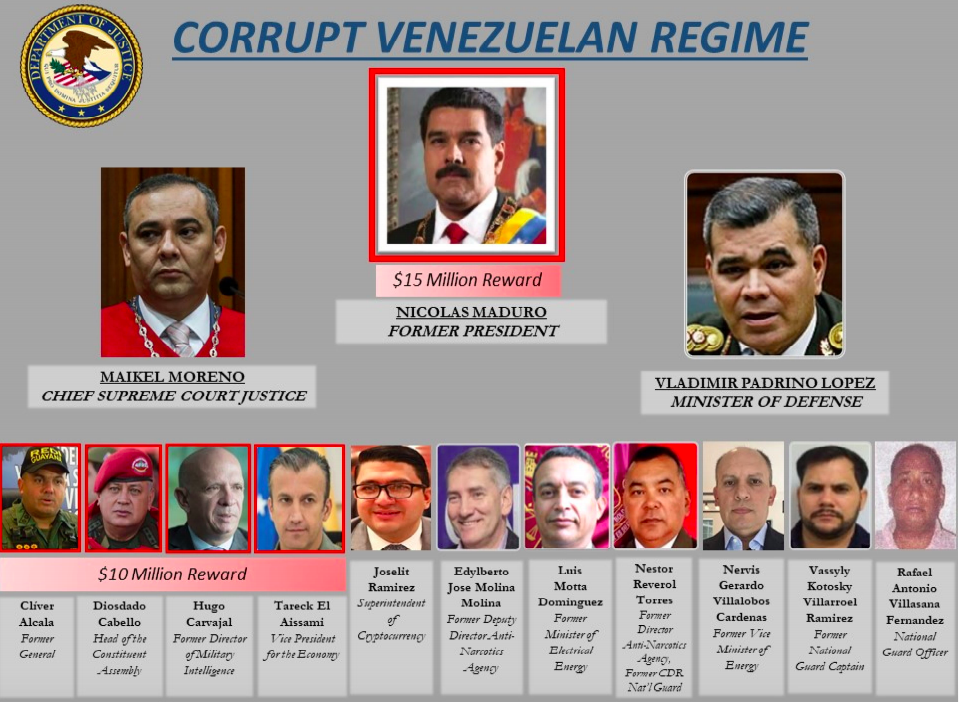 Corrupt Venezuelan regime. (Photo: The US Department of Justice)Maduro responded in a tweet saying that the U.S. and Colombia were conspiring to engulf Venezuela with violence and that he was obliged to defend the peace and stability of the entire homeland.

The Maduro regime helped former members of a dissident armed insurgency group within the Revolutionary Armed Forces of Colombia (FARC) use Venezuela as a transit point for moving cocaine from Colombia to the U.S., according to Attorney General William Barr.

“For more than 20 years, Maduro and a number of high-ranking colleagues allegedly conspired with the FARC, causing tons of cocaine to enter and devastate American communities,” Barr said. “Today’s announcement is focused on rooting out the extensive corruption within the Venezuelan government – a system constructed and controlled to enrich those at the highest levels of the government.”

U.S. authorities estimate that every year between 200 and 250 metric tons of cocaine are sent from Venezuela to Central America or shipped via maritime routes into the Caribbean.

Two leaders of the FARC, known as Ivan Marquez and Jesus Santrich, were also indicted.

In November 2016, the nephews of Maduro’s wife Cilia Flores, Efrain Campo Flores y Franqui Fracisco Flores de Freitas, were convicted in a Manhattan courtroom of conspiring to import hundreds of kilograms of cocaine into the U.S. and were sentenced to 18 years in prison.

For his his corrupt and oppressive reign Maduro was in 2016 named the OCCRP Man of the Year in Organized Crime and Corruption.