Carrying photos of slain investigative journalist Daphne Caruana Galizia and banners that labeled Prime Minister Joseph Muscat as “the 2019 most corrupt man in the world,” hundreds of people protested in Valletta against corruption on Sunday, the Newsbook outlet reported. 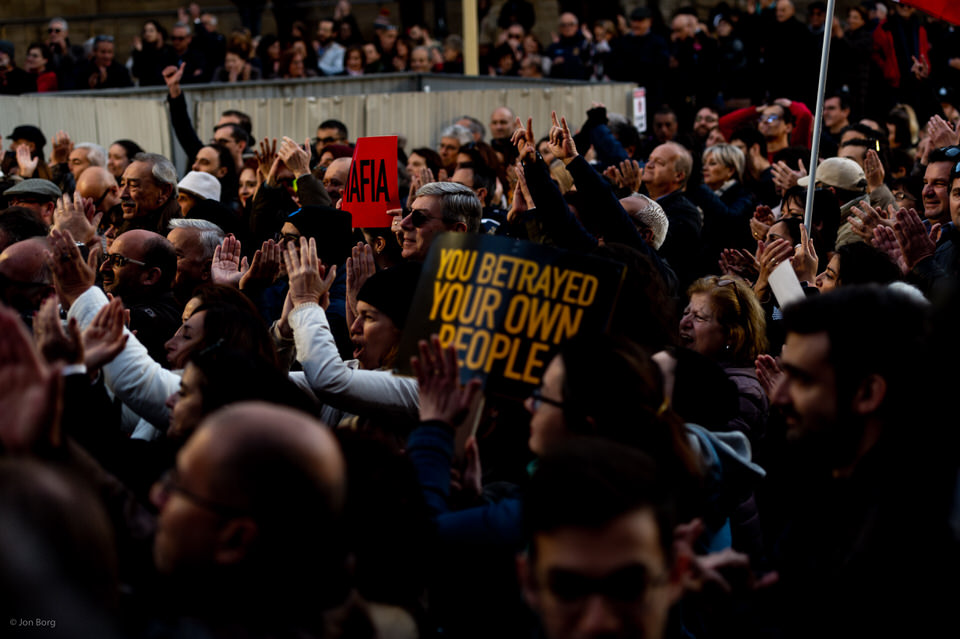 Massive anti-graft and anti-government protests in Valletta. (Photo: Repubblika Facebook)Civil society groups Repubblika, Occupy Justice and Manuel Delia.com, as the Times of Malta reported, organized the gathering in front of the building of the Maltese parliament. The participants then marched towards the Great Siege Square, where a concert against corruption was staged.

“You’ve betrayed your own people,” the protesters yelled, chanting “mafia, mafia” and other anti-government slogans.

The head of Repubblika, Vicki Ann Cremona, said, according to the report, that she hoped “Joseph Muscat and his corrupt gang would leave their posts, parliament and all other public roles as soon as possible.”

"Their corruption will be investigated and it would be recognised as such by people of all political beliefs,” she added.

Anger at Muscat’s government kept mounting last year as more and more details about the assasination of Caruana Galizia were revealed. Maltese NGOs have organized 17 anti-government protests since November.

The reporter was killed in a car bomb attack in October 2017, eight months after she blogged about the Dubai-based shady enterprise 17 Black Ltd. She alleged it was linked to some top Maltese politicians. Her findings were based on the Panama Papers leak.

A month after her assasination. Police arrested the owner of 17 Black, Maltese businessman Yorgen Fenech, while he was sailing away from the island on his yacht. He has been charged with murder and participation in a criminal organization. He has pleaded not guilty.

Fenech was arrested one day after an alleged middleman, Melvin Theuma, was offered a pardon in exchange for identifying the mastermind behind Caruana Galizia’s assasination.

Fenech’s arrest was followed by a wave of resignations of some of the country’s top officials. Pressed by protests, Prime Minister Muscat himself announced he will resign in January.

Stressing that under Muscat’s leadership, criminality and corruption have flourished in Malta — and in many cases gone unpunished, the OCCRP declared Joseph Muscat the “2019 man of the Year in Organized Crime and Corruption.”